Having owned a Ron Holland design yacht(albeit only 13 metres)and being blessed with the fantastic sailing abilities of the sailboat from the board of this architect, I have follow 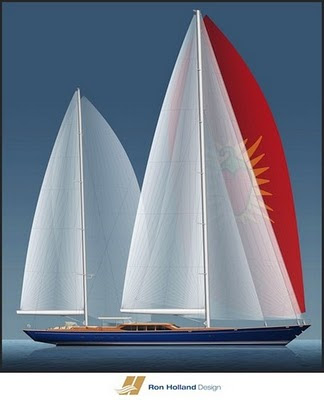 ed the career of Ron Holland and his designs as he has progressed further and further into top end super yacht vessels. As I have blogged before (see my post of August 2008 'My Dream Sailboat')about my dream cruising yacht being the RH designed Discovery 55, I felt that his latest classic design ketch coming in at 46metres(150 feet) should have an airing. Take a look at the following extract from Sail-World.com and marvel at the beautiful lines of this classic design 'Christopher', launched early December:

'Launched in December and due to be finished in January, this week's featured yacht is the 46m (150ft) ketch the SY Christopher, Ron Holland's latest design.

She was launched in the UK's Falmouth waters in early December by ship builders Pendennis, who partnered with Ron Holland Design and Palm Beach Yachts International to build the new yacht.

The launching was something of a celebration as over 400 Pendennis staff were present, along with the owners, at the end of 22 months of hard work, and many more months before that in design mode. 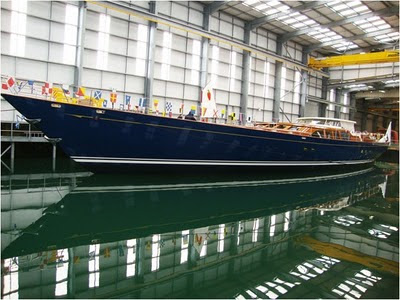 Father Jonathan Bielawski from St Mary's Immaculate Parish Church gave her a customary blessing before she slipped into the water.

Now its enormous masts have arrived at the shipyard, and there's no time to lose, as the Christopher is due to participate in her maiden race at the St Barths Bucket regatta in March.

The carbon fibre rig was shipped from Southern Spars in New Zealand, one of the leading producers of yacht rigging globally.

When she is finished, three staterooms and a study will provide the owners and their guests with accommodation for up to 12, with a further four cabins forward, sleeping eight crew.

Ron Holland says this yacht represents all of Ron Holland Design's latest thinking with regard to a performance oriented cruising yacht. Designed to reflect the styling of the classic yachts of the past, they have designed a sweeping sheerline and counter stern to emphasise her traditional lines. These aspects, together with the decision to teak clad her superstructure, have given Christopher a close connection to the magnificent sailing yachts of earlier years. These features camouflage the leading edge design detailing that was driven by their clients' desire for uncompromising sailing performance.

The yacht has refined underwater lines, sophisticated bulb keel and high aspect ratio centerboard. Her twin balanced rudders are an obvious departure for a large cruising yacht and have been incorporated to maximise sailing performance in strong wind conditions, and to allow space for a large tender to be deployed from the lazarette. 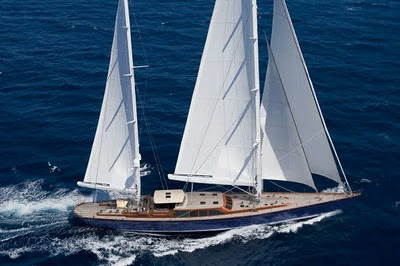 Christopher is the first Ron Holland design to be fully rigged with both carbon spars and carbon rigging, reducing the yacht's displacement while improving her overall sail carrying ability in strong winds.

Ron Holland's collaboration with Pendennis was a natural. They have one of the world’s leading custom superyacht build and refit facilities, and one of Cornwall's most important employers, based as they are at their 6.5 acre prime water front location in Falmouth, UK.'

You can read more about the excellent sailing qualities of Ron Holland designs in my ebook 'Voyage of the little Ship Tere Moana' downloadable from my website http://www.sailboat2adventure.com
Posted by sailboat2adventure at 14:17

Who are the owners?