All cruising sailors are very concerned at the huge amount of 'flotsam and Jetsam' to use the nautical term, of garbage mainly of plastic origin floating around and polluting the oceans of our planet. You have only to see footage of the recent result of the Japan Tsunami floating islands of detritius, one of which is sixty nautical miles in length, to understand the size of the problem.

These natural disasters will continue to occur and at this time there is not a lot we can do about them, however, as cruising sailors we can all do our bit when onshore and at sea to conserve this rubbish and dispose of it correctly.

When cruising in the middle of the ocean on a beautiful day with soft breeze and surrounded by blue it is hard to see what damage an empty beer can or plastic bag dropped over the side can do and no responsible sailor today would ever think of doing it. You only have to watch the video below to see what very small but irresponsible actions can ultimately cause with trigger fish being netted hundreds of miles from their normal habitat and containing plastic pieces in their stomach.

Sailors for the Sea, a nonprofit organization that educates and engages the boating community in the worldwide protection of the oceans, has written a lot about plastics in the ocean - so-called 'islands of trash' float, trapping fish, choking birds, and growing larger with the passage of time. However, confusion remains, so here is an update from the Sea Education Association (SEA):

Despite widespread concurrence on the subject the confusion remains due to the fact that these gyres are not actually floating mats of garbage the size of entire states, an image fostered by some of the earlier, more publicized reports.

They are, rather, concentrations of surface and sub-surface floating debris at the convergence of ocean currents. But how much plastic is really there? Conflicting reports and opinions have made it difficult to get a secure handle on the magnitude of the problem.

Every year SEA sails the Atlantic, Pacific and Caribbean with upwards of 25 college students and 10 professional crew aboard the Corwith Cramer and the Robert C. Seamans. SEA Semester students combine an interdisciplinary academic program of oceanography, history, literature, marine policy and nautical science with a six week open ocean voyage.

For forty years and one million miles sailed, SEA has been the only program in the world to teach college students about the ocean in this way. From 1986 to 2008, in the Atlantic Ocean, over 4,887 individuals have participated in this study of ocean-bound plastics, collecting and cataloguing over 64,000 individuals pieces of plastic, most only millimeters in size. Through these efforts, SEA has amassed an 'unrivaled dataset' that helps describe the extent of this pollution, and can teach us about the fate of plastics in the ocean.

The following article from 'Sailors for the Sea' gives you an idea of the problem and what projects this organisation is engaged in:

So what did SEA find?

Over those 22 years, SEA conducted 6,136 surface plankton net tows on annually repeated cruise tracks throughout the North Atlantic and Caribbean Sea. Sixty-two percent of all plankton tows contained some amount of plastic, with the highest in a single 30-minute tow being 1069 individual pieces. To scale, that equals 580,000 pieces per square kilometer (about 360,000 per square mile). That sounds like a LOT of plastic, but many of these pieces are less than a millimeter thick. While it makes for a less thrilling visual, it does make for a more dire outlook for the ocean and its fauna. The data reported by SEA in Science only accounts for floating surface debris. It does not account for plastic that has sunk below e surface or to the sea floor, or been ingested by fish, mammals or birds. Over 22 years, that could be quite a lot of plastic.

To get a sense of how much plastic could be in the ocean far below the surface, where SEA's plankton nets could not get to them, try this exercise:

Find a plastic bottle (Poland Spring, Gatorade, etc.). Remove the cap, fill the bottle to the brim with water, and submerge in a tub or a bucket (make sure to get all the bubbles out). Does it sink or float? Now submerge the cap. Sink or float? If you were using a Poland Spring bottle, or another brand with a 1 recycling number stamped on the bottom, it should have sunk (this is one of the most dense plastics). The cap (probably made of less dense HDPE
Posted by sailboat2adventure at 14:18 2 comments:

Hypothermia and Cold Water Capsize and MOB Procedures for Sailors

If you have ever had to rescue a MOB from water at any temperature of 20 degrees or lower you will know how quickly cold sets in followed rapidly by hypothermia.

Winter sailing is as much fun as sailing in the warmer weather but if you are in the water through going overboard or even capsize, the urgency of fast rescue is extremely important.

With winter setting in here in southern climes here is a timely reminder for all sailors who are venturing on the water over the next few months.

The following is a timely reminder from NSW Maritime how to be prepared and handle this situation if it occurs on your sailboat: 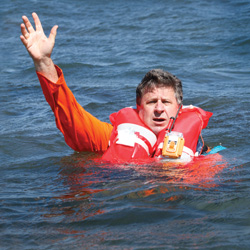 'The risk of falling overboard may be small, but the threat to life of such incidents is extremely serious. They best way for boaters to reduce the risk of an incident is to prepare before they get out on the water. Incidents attributed to the environment most likely could have been prevented if the vessel operator had not overlooked warning signals such as weather forecasts, not made bad decisions or had the proper boating skills for the environment.

Body temperature can cool down 25 times faster when immersed in cold water, with children and older persons being the most vulnerable to effects of hypothermia.


The "Cold Weather Boating and Capsize Education" Campaign seeks to raise awareness in the boating community on how to prevent and/or reduce the risks involved in boating in cold weather and boat capsize.


The focus of the campaign is:


Firstly, to improve the boating public's awareness of the dangers associated vessel capsize, by
ensuring vessel are not overloaded, both with passengers or gear
ensuring there are sufficient lifejackets onboard for each person and are within easy access
ensure all other safety equipment is onboard and in working order
secondly, to improve boaters knowledge of the life threatening effects of hypothermia, and techniques to reduce the affects, such as HELP and HUDDLE, and
finally, monitor boater compliance to licensing and registration requirements.

Capsize
Capsize is a major contributor to boating fatalities, so make sure your boat is appropriate for the conditions and has built-in flotation.


Always check the weather before and during boating and never overload - it"s illegal and dangerous.


If you do capsize, or get swamped, stay with your craft and your chances of rescue are improved.


Weather
The weather is important to your safety. Always check the weather before and during boating. If it looks dicey, don't go out ... and if it starts to turn, head straight for shelter.


A marine radio helps you keep in touch with weather updates.


Learn to understand and read weather patterns. Know the wind and the limits of your craft ... and you'll be right.


Hypothermia: Cold Water Kills
Boaters have a greater exposure to the elements than most and boating in the cooler weather means a higher risk of developing hypothermia from wind-chill, capsize and damp and wet clothes.


Hypothermia is the effect of heat loss from the body.


The best way to avoid getting hypothermia is not to put yourself in the situation where you have an increased risk of capsize or swamping. That means checking the weather before you go, and throughout the voyage. If in doubt don't go out.
To wear warm thermal clothing, including a beanie and add wet weather gear over your warm clothes to provide wind proofing.
Children and poor swimmers should wear a lifejacket at all times and this goes for everyone if conditions get rough. Wear your lifejacket. This will keep you afloat if you are forced into the water.

Fit buoyancy to your boat to keep it afloat when capsized. Remain with your craft - this will increase your chances of being located quickly after a capsize or swamping.

Boaters should be wary of using gumboots and waders as these make it difficult to swim should you fall into the water.
Alcohol increases the body's heat loss by increasing the flow of blood to the surface areas of the body where it is quickly dissipated.
Stay under your designated alcohol limit.
For recreational vessel operators over 18 years the limit is under .05.
For commercial vessel operators the limit is under .02.
A nil alcohol limit is in force for recreational vessel operators under 18 years.
Signs of Hypothermia
Immersion in cold water can quickly affect the brain. This creates a dangerous situation because a person may not realise they are in danger.


Eventually a hypothermic person will lose consciousness and may drown if not wearing a type 1 lifejacket.


Treatment of Hypothermia
The aim should be to reduce any further heat loss and try to commence rewarming slowly. Consider the following:


Avoid rough handling and exercising of the victim;
Wet clothing should be removed and dry clothes blankets and other warm materials applied (body heat can also be used);
Remember to warm the person slowly, never put them close to a fire or in a hot bath;
If conscious, give warm drinks (never alcohol); and
Commence artificial respiration if necessary.'

You can read more about MOB and rescue situations and equipment in my ebook 'Voyage of the Little Ship Tere Moana' downloadable from my website http://www.sailboat2adventure.com

Posted by sailboat2adventure at 12:19 No comments: