The new America's Cup Class AC45 and AC72 catamarans are creating a lot of excitement in New Zealand as that is where they are going to be built. Following my visit to the Auckland Maritime Museum and seeing the Americas Cup winner NZL 32 'Black Magic', I decided to call into the new BMW-Oracle production facility in Warkworth, north of Auckland. As I was on my way up to the Mangawhai Heads, I would pass through Warkworth on the way. Warkworth is a delightful rural town about one and a half hours run north of the city.

The first hull of the new AC45 has been released and the following is an extract by Richard Gladwell from http://www.sailworld.com/ :

'BMW Oracle Racing look to be set to put the sleepy northern Auckland town of Warkworth on the technology map with the establishment of a new hi-tech boatbuilding facility that will employ between 50-70 people.

The new facility to be known as Core Composites is off to a flying start with the production of the new America's Cup 45 class of catamaran, but will be also supplying to other b 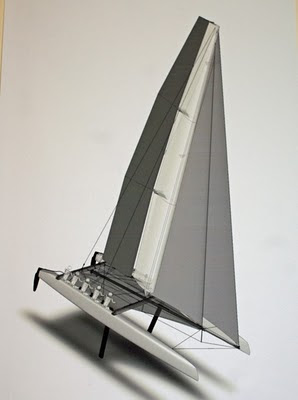 Based in the old Rodney and Waitemata Times production facility, previously a major employer in the area, the building has plenty of open floor area and high ceilings – ideal for some of the big gear either already installed or on order.

Already one five axis machining centre is installed - which will handle a component of 6metres x 3 metres by 1.5 metres. Kerry Jones, who is in charge of the machining at Core Composites describes it as 'the Baby'. But it is the biggest machine of its type in New Zealand. A second 'Monster'machining centre will take components up to 26 metres in length.

'We have these two five axis CNC machining centers, a CNC lathe and some other equipment basically to handle the capacity that we have rather than outsourcing all the parts that we do for the rigging', explains Jones.

'We probably will outsource some specialised components – when it comes to America’s Cup boats we will have to do the hulls in America. That is in the Protocol', explains Chief Operating Officer, Stephen Barclay.

The grand scheme is to be able to build all components for the AC45 class on site and thanks to some liberal rules in the new Protocol for the 34th America’s Cup, only the hulls of the BMW Oracle Racing’s AC72 yachts need be constructed in the USA. A special team will be sent from New Zealand to USA to do this. The AC72 wingsail, foils and all other components can be manufactured in the Warkworth facility.

The five head 'baby' machining centre in the BMW Oracle Racing building facility - Warkworth. Capable of taking material up to 6 metres in length (the largest machine of its type in NZ) a second machine capable of handling 26 metres is on its way. 'We have the capability to do everything,' adds Jones, turning to the big five axis machining centre, which he refers to as 'the Baby'.

'This is the smaller one of the two that we have', explains Jones. 'It has a tilting rotary head so we have full five axis of movement on the head and a 6-meter stroke by 3-meter by 1.5 meter on the Z axis. '

Think of three dimensional drawings with width depth and height ('X', 'Y' and 'Z' dimensions) and you have an idea of the composite engineering art forms these machines can produce.

'It is the only one of its kind in New Zealand at the moment,' says Jones. 'We are getting a bigger one which is going in what we call the boat shed (really a huge two or three level room the size of a warehouse).

'This one will fit on the table of the big one', explains Jones to underline the size of the new beast.
'It is designed for the aerospace industry, and making spar component parts, it is quite widely used by Boeing and companies like that. It can machine up turbine blades, and not just marine stuff, but also automotive and aerospace components,' he adds.

'The machine are going to be used for doing a lot of the mould work for the composite construction', explains Barclay. 'We get the designs from the design crew and then we convert that into cutting files and then we basically supply all the mould components to the boat builders.

'In the past we would have to an outside company to get tooling and components made. That cost a fortune and you are beholden to the outside companies in terms of timing and things like that. 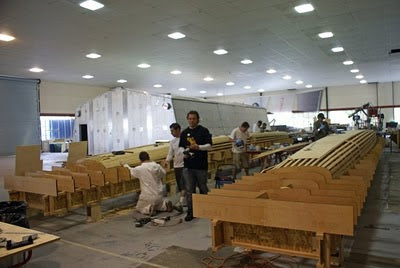 'By having these machines in-house we can do all of that stuff ourselves. Of course over time we can amortise the cost of it, so if we have a long-term use it will actually be cheaper for us to be able to handle this capability in-house. '

As mentioned 'the Baby' can handle components measuring 6-meter by 3-meter by 1.5 meter.

And the big one?

'The big machine is going to be 26-meter long by 6-meter by 3.5 metres' says Jones, drooling ever so slightly.

Barclay explains that 'the Beast' is going to be hitting a roof in the boat shed. 'It will be 9-meter high. It is a massive machine that can basically machine a whole boat - the whole hull. It will take up most of this shed - with a sail-loft at the other end.'

BMW Oracle Racing purchased the facility about 18 months ago

'The ambition and reason why we did it was that the team has aspirations of being around for a long time . We spent so much money to finish products around the world so that is really the reason for doing it, it actually saves us money. And of course, we can guarantee the quality which for any big team is really important,' explains Barclay.

About 50-70 boat builders will be employed at Core Composites, the reason for the shift to New Zealand is that the labour costs are less and the skills and engineer 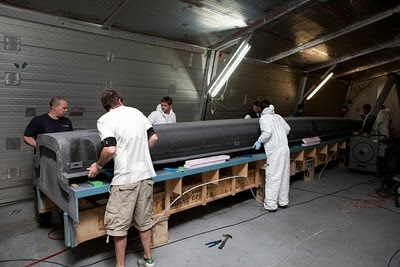 ing expertise are high. 'We are looking at working with a lot of New Zealand’s resource to help us with the AC 45 project and we are actively talking to a number of contracting companies at the moment', says Barclay.

Another plus for the Warkworth facility is that it allows the storage of an enormous amount of kit. 'When you have been an America’s Cup Team in operation since 1990, you acquire a lot of gear', explains Barclay resignedly. 'It will be good to see what we really have in the one place.'

Construction is well advanced with the male moulds for the AC 45 class of which six are expected to be sailing by mid-2011. The first will be launched in January 2011. Each competing team in the 34th America's Cup will own at least one of the yachts, maybe two. The wingsails for the AC45's will also be built in Warkworth on the same floor.

Right now the focus of Core Composites is to get the AC45’s into production.

'It will be America’s Cup Race Management and the yet to be appointed Regatta Director’s responsibility to determine who gets their boats first, and overseeing the training program we are looking to put in place before Christmas,' says Barclay.

'It is the Regatta director’s job to make sure that all the teams are handled in a way that is fair and equitable.'

'We are certainly up and running.'

You can read more about sailing and cruising from my ebook 'Voyage of the Little Ship Tere Moana' downloadable from my website for sailors http://www.sailboat2adventure.com
Posted by sailboat2adventure at 12:31

Your blog really very fantastic and all the information are very awesome and great it's really interesting all the topic about the work motivation.
School Construction