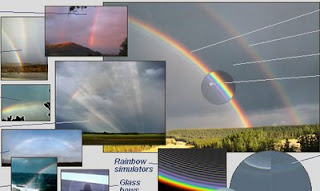 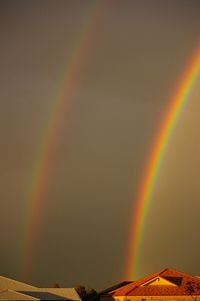 n, glancing over his shoulder into a disappearing rain squall is transfixed by a rare sight. There, sitting dead centre of the fast retreating raindrops, and between them and the moon behind him, is a perfect Moonbow. This rare phenomenon is created exactly the same way as a daytime rainbow with this particular one forming a perfect hoop from sea surface to sea surface, absolute even brightness all the way round, with the bands quite distinctly separated.
They are not in colour, just various shades of grey matching the daytime rainbow band sequence. Night light has not sufficient strength to activate the colour cone receptors of the human eye so they don’t recognise colour. Staring with wonder, it goes through the captains’ mind to rouse the others, but rather selfishly decides to let them sleep on. If he woke them and they were anything less impressed than he, then it would diminish his own satisfaction and fulfilment of witnessing one of natures’ marvels – what a privilege to view this unique spectacle.'
Images reproduced courtesy atoptics and Wikipedia
You can read more about weather patterns, reading and interpreting the weather whilst cruising/passagemaking in my ebook 'Voyage of the Little Ship 'Tere Moana' downloadable from my website http://www.sailboat2adventure.com/ - see you there.
Posted by sailboat2adventure at 13:49 1 comment: 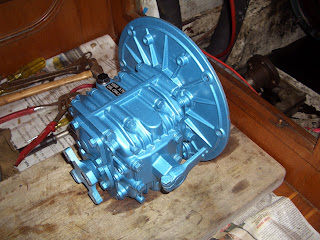 t from all angles and following several false starts (colds, 'flu and strong winds, big chop in a dinghy) Patrick and I find ourselves back on board and fully prepared to re-install the gearbox.

Hunkering down into position in the cramped space we prepare for the long haul of heaving the box (heavy when you are kneeling in a cramped position and leaning forward) onto the engine bolts and then getting all the nuts and washers on and tightened correctly. My suggestion of going on through into the engine, removing the bearings and checking them was met with astonished incredulity! - they had been replaced previously and were fine, so my brand of humour was treated with the contempt it deserved!

One small problem we encountered was how to get the four coupling bolts back into their respective holes once in position. They had wriggled out after some difficulty when removing the gearbox and we worked on the premise that what came out must go back in. However, on re-assembly the angle was so acute, there was no way they would line up sufficiently to access the holes in the gearbox coupling flange from the forward engine side. 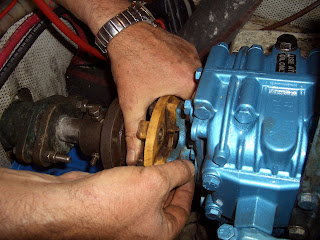 t side with a spacer under the bolt head. This was tried on one but, as the lock nuts are half as thick again as the bolt head, we felt the clearance from the gearbox casing was insufficient - it was down to 1.5mm. In all probability this clearance was enough, but it looked way to fine for our liking and in its original position the clearance was around 3mm. What to do?

In the end it was quite simple - we obtained some shiny new locknuts which Patrick ground down on his workshop grinder, taking off 1.5mm from the underside.

Another dinghy trip out to the yacht saw us crunching down around the engine again and fitting the new nuts. Voila! they fitted perfectly, and with the additional spacer under the bolt head we now had 3mm. clearance between the nuts outer surface (the bolt end be 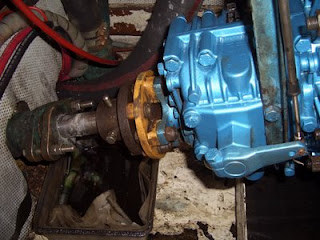 ing flush with the lock nut) and the gearbox casing - looked much better, and along with peace of mind, it gave us confidence in a job well done.

All that remained now was to couple to the 'drive saver' and the shaft coupling and this was a breeze. The gear cable strut was then bolted back into position and the gear cable attached ensuring it was placed in its correct groove.

The moment of truth had arrived when it was time to start the engine and test that the gears would take up and operate correctly. With the engine on and running Patrick slipped it into the forward position - after a moments hesitation there was a satisfactory clunk and she was in gear - into neutral and into reverse - same clunk again and she was in reverse. Grins all round. Everything was working as it should so the kettle was put on and a sweeter cup of tea was never enjoyed more.

Patrick has just returned from a few days sail up the NSW coast and reports that when motoring the gears are working perfectly.

Lessons: With a little time and patience, no job cannot be tackled on your own boat.

Never be afraid to consult with the experts - in this case it was Barry of Marine Gearbox Services whose email is marinegearbox1@yahoo.com.au

When uncoupling the gearbox make sure you leave the four coupling flange bolts in position in the flange - this will overcome any problems when re-fitting.

You can read more about mechanical maintenance onboard whilst cruising in my ebook 'Voyage of the Little Ship 'Tere Moana' downlaodable from my website http://www.sailboat2advenure.com/
Posted by sailboat2adventure at 11:37 No comments: