Remember I did a post last year (April 27/2010) on eBook readers for cruising sailors to take with them on their sailboat for their 'adventure of a lifetime'? 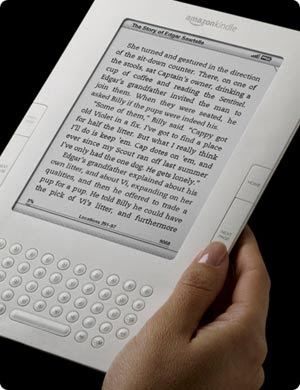 I had held back from purchasing one as the only way was online through Amazon. Fortunately a friend of mine had received a Kindle as a present some months earlier so I was able to get it into my hands and have a play. Meanwhile I had checked out several other ebook readers such as the Sony, Kobo and iPad etc., and whilst they were all impressive and all had varying features, the one main drawback for me was that to an item, they all still gave the impression of reading through glass - which as a reader is quite off putting if one is reading for any length of time.
So, to actually hold the Kindle and test this particular feature was what I wanted. I can report that the reading experience with Kindle is excellent. When looking at the page it is exactly like seeing the printed word on paper. I know this is how the Kindle has been promoted but I wanted to see it for myself. And from that perspective it rates 10/10. I am not sure how this has been achieved as after all it is still a glass screen, but nonetheless, that is the final result and to a serious reader, that is what is important.
I purchased one immediately and have been reading with it continuously for a month now. It was instant lust and it accompanies me wherever I go. 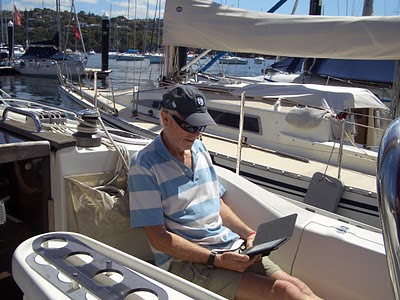 It is light weight and very compact, being about the dimensions of a standard paperback but, even with the cover, only one third of the thickness. It can be read almost anywhere except in the dark. You can see yours truly right here, happily reading in full sunlight - and that is the beauty of the Kindle - from a reading point of view (print on page), it is exactly like a book.
I purchased the Kindle online from Amazon for US$139. The closable cover is an additional US$39. The Kindle is now available in 3G and this I bought for another US$50. Total cost US$228. Compare this price to many other ebook readers which are currently on the market, the Kindle is excellent buying indeed. The Apple iPad for example is very tempting with all the apps available for it, but you are looking at a starting price of $600, less portability and still do not have a proper reading experience.
To say I am delighted with my Kindle is an understatement.
The many features can be explored by clicking on the Kindle banner to the right.
Once you have overcome the initial involuntary response of trying to turn the page with your finger instead of touching the button, you are already on your way to many hours of happy reading. All classics and out of copyright books are free or just a few pennies, and all current titles run out at half to a third of normal retail. A range of newspapers, magazines and even technical books (including marine) are also available - this range will increase massively over time. Your Kindle library will store 3000 books plus (and can be backed up onto your computer so you won't lose them) which should keep most readers happy for many years.
Battery life is always a serious question for the cruising sailor and I am happy to report that Kindle have solved this problem as well. Using a lithium battery and keeping the WiFi turned off except for downloading new books or material, the battery will power the unit for up to a whole month before needing to re-charge. You must always remember to slide the 'wake up' button on and off when commencing reading and finishing. This is very impressive when you compare the power requirements of other units. 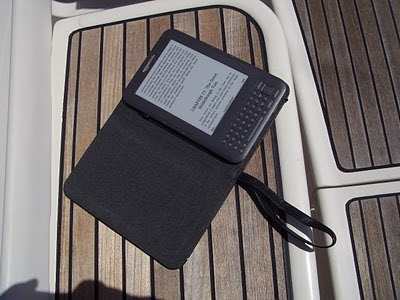 You will notice in the image to the right a leather strap attached to my Kindle. I went to my local cobbler who rummaged through his off cuts and came up with a nice little leather strip which he then sewed into the seam of the cover. Ten dollars later I picked it up and it has been swinging from my wrist ever since. I had this sewn in to prevent accidents such as dropping it onto the sidewalk or overboard when boarding etc.etc.
No more will the cruiser have to carry piles of dog eared paperbacks half way around the world, wondering where they can be stored, not to mention the additional weight. And might I suggest that if you were planning on buying Kindle you may wish to make it two, so as to avoid any arguments as to who is going to read it!
Just visualise yourself reading in the cockpit under the canopy on a fine downwind tropical day, on a mooring, or tucked up in your bunk at night or in a cafe on a far away shore - bliss.
Check out the Kindle features by clicking on the banner at right and begin your new reading experience of the future.
You can read more about reading on passage and far away places in my ebook 'Voyage of the Little Ship Tere Moana' downloadable from my website http://www.sailboat2adventure.com/
Posted by sailboat2adventure at 13:58 2 comments: 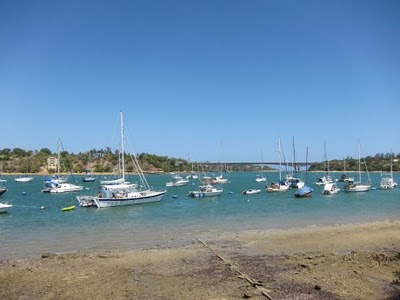 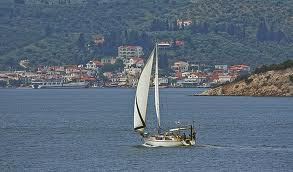 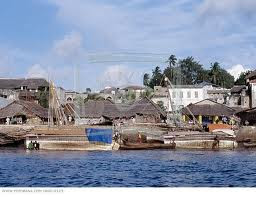 Excerpt article Colin Speedie, images courtesy Colin Speedie and Google
You can read more about Pirates in the Caribbean (Columbia coast) in my ebook 'Voyage of the Little Ship Tere Moana' downloadable from my website http://www.sailboat2adventure.com
Posted by sailboat2adventure at 13:38 2 comments: