When passagemaking in the tropics a shower head in the cockpit of your sailboat is a wonderful thing. Following on from a canvas bucket salt water shower and soap scrub, the freshwater rinse down, standing in the cockpit and basking in the warmth of the late afternoon sun is sublime.
﻿
﻿ ﻿﻿﻿﻿Here is an extract from my ebook 'Voyage of the Little Ship Tere Moana' describing the system we used whilst on passage in the Pacific:
﻿﻿

﻿﻿'Her crews’ ablutionary needs are somewhat more complex however, although the execution is quite simple. Every other day, or whenever the need takes them, the crew in turn, grab a canvas bucket, head for the amid ship deck area and strip off. Dousing themselves thoroughly with several buckets of sparkling sea water, they then set about themselves with a bar of salt water soap.
With vigorous application, this stuff lathers into a semblance of foam, sufficient enough anyway for the recipient to at least feel their skin has been attacked by some cleaning emollient.
﻿﻿﻿
﻿ Several refreshing buckets later they make their way back to the cockpit and hose down with a final rinse of fresh water from the port shower hose fitting. This fresh water, sitting in the pipes, is always warm and therefore would be thought not to be refreshing. Actually, it is the most delicious way to finish off a salt water shower – the oohs and aahs of pure pleasure coming from her crew, as this welcome warmth cascades from head to toe, corroborates this for her. It is also economical in that only a litre or two of precious fresh water is used.
﻿﻿
﻿﻿When finished, the crewmember feeling completely refreshed, launches themselves back into their rigorous duties with renewed vigour. Mid afternoon on a fine downwind tropical day.....'

﻿﻿It is also useful for sluicing down the cockpit area following the landing, gutting and cleaning of fish. This can be quite a messy procedure on board and in the tropical sun, all blood, scales and the like need to be washed away immediately. Blood especially can leave permanent stains on teak decking if not removed quickly.
There are many systems available on the market of course, the following animation video showing the installation of a Whale product being but one. You can check out their other products on their website http://www.whalepumps.com/
You can read much more about water conservation, the cruising life and daily maintenance chores in my ebook 'Voyage of the Little Ship Tere Moana' downloadable from my website http://www.sailboat2adventure.com/
Posted by sailboat2adventure at 10:48 1 comment:

The chainplates of your sailboat are critical integral parts of your  vessel and need to be checked regularly that they are in good sound condition. Whilst on passage, if a chainplate is fractured or broken you are likely going to lose your rig - and if this happens it won't be on a nice calm day - it will be when a squall hits you or during boisterous conditions, which will make your job that much more difficult to secure your boat, minimise damage and then commence with your jury rig. 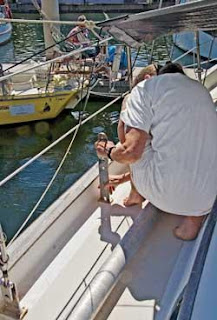 I had over spec'd very strong chainplates on my boat and it was always very comforting to open up the locker doors and have these clean, dry, mirror finish steel plates bolted on with clean bright nuts reflecting back at me.

The following article describes what can happen when cruising in remote areas and the hurdles that have to be overcome to effect a repair.
It also illustrates the benefits of regular checking so that the job can be done, if needs be, whilst at anchor. In this case, there are virtually no facilities in the Marquesas and whilst it doesn't say, I suspect the they had to sail on to Papeete in Tahiti, which is a further 800 nautical miles - a long way with a jury rig if it has come down at sea!
Here is what Ann Hoffman writes:
After completing our longest passage ever—3,300 miles of downwind sailing—my husband, Tom Bailey, and I anchored 'Oddly Enough', our Peterson 44, in a quiet cove in the Marquesas. As part of our maintenance routine, I checked the deck-level rigging before we sailed farther into the Pacific. I wasn’t expecting to find any problems—regular checks on the long passage hadn’t turned up anything—but when I got to the backstay, I found a pronounced crack in the top of the chainplate running through to the clevis pin.
Our options for replacing the chainplate were limited. A friend suggested we might use leaf springs from a big truck, which should be available even on an out island. We could then replace the mild steel with stainless steel when we returned to civilization. Luckily, there was a less-dramatic option. The chainplate extended far enough above the deck to cut off the top and drill a new hole for the clevis pin, which we could do using our boat tools and a drill press carried on board by the friendly owners of a powerboat.
﻿
﻿ Chainplates eventually fail due to the same factors that affect standing rigging: corrosion and metal fatigue. Corrosion can occur in the open air or in places—such as where the chainplate runs through the deck—from which oxygen is locked out; the latter is called anaerobic corrosion. Metal fatigue happens at the points where plates are subject to working—the side-to-side movement that leads to fracturing of the crystalline structure of the metal. Dyes are available that can be used to check for cracks, but it seems that chainplates are rarely tested and aren’t often removed for inspection.
When we bought 'Oddly Enough', we removed our chainplates and took them to a welder for inspection. They were in good enough shape to be used after he spot-welded a few areas of minor corrosion. Washers had been welded to our plates to increase the thickness of the top and so distribute the load on the pin. The welds probably weakened the metal and contributed to corrosion.
When we were finally berthed in a port with good marine facilities, it was time to replace all of the chainplates. To do this, first remove the shrouds and/or stays. Be sure you know what removing the stay will do to the rig. If you’re in a marina or a calm anchorage, it’s likely that a keel-stepped mast will continue to stand by itself if any of the shrouds are removed. But if you have any doubts, run a halyard to take up the strain. Before removing forestays and backstays, you must arrange backups. For the backstay, we rig a bridle to hawse holes at the stern, and we attach the main halyard to the bridle. For the forestay, you could use an inner forestay, if your boat has one, or better yet, rig a halyard and tension it to take the forestay’s place. Half a dozen turns off a turnbuckle will loosen the wire enough so that the clevis pin can be pulled out.
Remove all deck plates, and scrape away any sealant. The chainplates can then be unbolted and pulled up through the deck. Often, access to the bolts holding the plates to knees or to bulkheads is hidden behind interior furniture that must be dismantled. On 'Oddly Enough', we’d removed the locker linings to have ready access to the knees; this arrangement looks shippy rather than elegant, but it allows us to pull bolts to check for problems.
Chainplates mounted on the outside of the hull should also be inspected, as they, too, are subject to fatigue and corrosion, especially on the side facing the hull. Such chainplates are generally easier to remove and replace than the ones for inboard shrouds.
When you have new chainplates made, specify exactly what’s needed, especially if you’re sailing in remote areas. Rigging and fasteners may be specified in either metric or U.S. measurements, and it’s best to give sample pins and bolts to the machine shop. In our case, stainless-steel stock in a thickness appropriate for our lower shrouds was available in town, but not for our uppers or backstay; we had to pay for a sheet of stainless steel out of which the new chainplates were cut. The new plates came out beefier than the old, which was fine with me—chainplates should always be oversized—and it was easy enough to enlarge the holes in the deck. Finally, if your plates are bent, be sure to specify the angle you want or give the machinist the original to match.
Factors that lead to early chainplate failure can often be prevented. Clevis pins must be matched to hole size. A pin that’s too small causes point loading; instead of the upward pull of the rigging being distributed around the circumference of the hole, it’s concentrated on just the metal surface that touches the plate. Use either a larger pin or a bushing that narrows the hole to the proper size. The pin should fit snugly, but not so tightly that it must be hammered in.

Check out this chainplate punch
One contributing factor to anaerobic corrosion is moisture trapped between the deck and the chainplate. Cover plates are bedded with sealant and screwed to the deck to help form a protective sealing rim around the straps. The cover plates can be pulled up, the straps inspected at deck level, and the covers resealed without removing the chainplates. Adding covers on Oddly Enough prevented the kind of minor corrosion that we’d had spot-welded.
It’s easy to ignore your chainplates and just hope they’re in good shape. Pulling chainplates as part of regular maintenance isn’t practical, but if you can get to your belowdecks fasteners, you should remove a few to check for moisture, which usually means there’s a leak at the deck level. Any corroded bolts should be replaced with new ones. It’s a good idea to mark which ones are prone to corrosion and check them occasionally. Pulling the clevis pin, a good maintenance practice, allows you to assess the condition of the top of your chainplates. A bent chainplate may crack at the bend, especially if the bend isn’t exactly in line with the pull of the stay. Any pumping of the rig will cause the chainplate to work back and forth. As the bend is usually at deck level, this makes pulling chainplate covers and digging out the sealant a critical check.
Regular maintenance of your chainplates, as with any piece of sailing gear, builds up a picture of what that equipment looks like when it’s in good shape and will aid you in recognizing when it’s time to make appropriate repairs.
Article courtesy Ann Hoffner and Cruising World, images courtesy Ann Hoffner, Cruising World, video courtesy YouTube


You can read more about maintenance and repair whilst cruising, in my ebook 'Voyage of the Little Ship Tere Moana' downloadable from my website www.sailboat2adventure.com
Posted by sailboat2adventure at 14:20 No comments: