Boomkickers for Cruising Yachts to 38ft

Here is some interesting information about Vangs/Boomkickers.
Boomkickers are the simple, affordable solution to supporting the boom and eliminating the chafe, hang-ups and adjustments of a topping lift.
Sailboat performance is improved with less weight and windage aloft. In light air, lifting the boom opens the leech for a faster sail shape and more speed. Reefing is safer and easier with better boom control.
Boomkickers use two coated fiberglass spring rods to provide the force necessary to support the boom and mainsail. The rods are clamped into hardcoat anodized aluminum end pieces and attached to universal mast and boom fittings. Fitting are included along with machine screw fasteners and the proper drill and tap. The mast fitting has a standard round slide which, used in the luff groove, avoids drilling into the mast. It also allows adjustments later if needed. Flat slides in varying widths are available from the factory. The slides can often be inserted at the sail opening above the gooseneck and slid down reassembling the fitting in position. If slides are not usable, the fitting can be attached directly to the mast using the same drill and tap provided for the boom. The custom extruded boom fitting is countoured to fit both round and flat bottom booms.
The two sketches below show the basic set up of the Boomkicker models 750, 1000 and 1500. When installed, the Boomkicker is straight with the boom positioned above the usual sailing height. As the mainsheet or vang is tensioned, the Boomkicker flexes smoothly from straight to flexed. The force stays relatively constant as the Boomkicker continues to flex, which helps keep the vang efficient. Each standard model has two sets of spring rods of different diameter and force so you can choose the set that best matches your boom weight and preference for support.

The more forceful the rods, the more support for the boom but the harder it is to pull on the vang. In general only about 10lbs should be needed to pull the end of the boom down by hand. The larger diameter or more forceful set is initially installed. If the boat is at the smaller range of the model, switching to the lighter rods before installation is recommended. At their initial length, the rods provide as much as 6 feet of travel at the end of the boom depending on the set up. If needed the spring rods are easily shortened up to 10" with a hacksaw to fit above the vang, with some loss of range.
Reproduced courtesy Mauri Pro Sailing
You can read more about standing rigging set up in my ebook 'Voyage of the Little Ship 'Tere Moana' on my website www.sailboat2adventure.com

This free service is now available and requires registration. It is very simple to operate once installed by just circling a box around the area you are interested in. 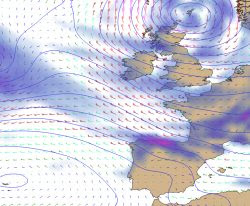 Our freeware application Ugrib allows instant and fully customizable access to global weather data. Within one simple to use interface you can download and view weather data right on your desktop.
Download your completely free copy here!

Grib is the format used by the meteorological institutes of the world to transport and manipulate weather data and is the foundation of the forecasts we see around us in our daily life. In the past, accessing and viewing GRIB weather data has often required a tricky combination 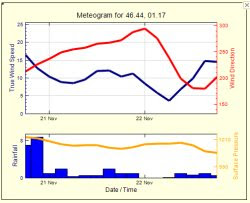 of technical knowledge and expensive software
Now there's GRIB.US. A company that empowers you, the end-user, to interactively extract your own custom GRIB weather files tailored to your needs. We also provide you with our - easy to use- Ugrib software to view this data so that you can look at weather data for anywhere in the world when you want to, where you want to. Best of all, this is all for FREE!

How to get the GRIB data:

The Ugrib software: our own windows software will let you view the GRIB files you have just downloaded, animate them, display meteograms and much more!
It also allows direct access to our backend servers without the need to open a browser. Ideal for use either ashore or on a limited bandwidth connection e.g. onboard a yacht. Ugrib will let you choose your resolution, timesteps, variables etc. Also you can save these settings for future use.
All this is tightly integrated into one simple to use program. This website: in the Grib data section it has a graphical selection tool that allows the immediate download of surface GRIB data with 10m Winds and Sea Level Pressure. There are no preset areas and you can select exactly the area you need.Register here and get FREE access to both services

Our Ugrib windows software is now available and it's completely free to download and use ! Lots of great features, clear graphics and direct access to the GRIB.US servers.
Reproduced courtesy of Ugrib.US website www.grib.us
You can read more about weather and forecasting in my ebook 'Voyage of the Little Ship 'Tere Moana' on my website www.sailboat2adventure.com

Posted by sailboat2adventure at 22:41 No comments: 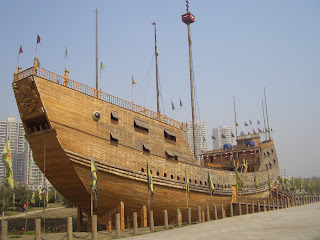 Just returned from a month in China and for some reason was unable to access this blog whilst there.
One of my reasons for going was to visit the Zheng He museums in Nanjing, where this incredible navigator spent much of his time dealing with the emperor of the day(Nanjing was the capital back then) and where the shipyard was located in which 200 ships were built by 35,000 craftsmen/shipbuilders over two years.
These were no ordinary ships in that they ranged in length from 60 metres to more than 100 metres! They were constructed entirely from timber and used the principle of bamboo compartments so that each vessel

was made up of several watertight compartments so they wouldn't sink - very clever idea and light years ahead of European shipbuilding at that time.

Zheng He was a huge man standing well over 2 metres in height(he was in all probability a eunuch) and was a voyager, navigator, explorer, diplomat and ambassador all rolled into one.
He made seven epic voyages from 1405 as far south as Indonesia, to Malaysia, Burma, Ceylon, India and as far west as the east coast of Africa. His main purpose was to open up trade routes as opposed to conquering and making war. Each voyage consisted of twenty or so vessels, the largest at sixty metres being the flagship and of course the one he travelled in. There were separate ships for water, rice, horses, troops and gardens for vegetables, and even one on each trip carrying emissiaries and concubines to entertain foreign luminaries.
It is even suggested that he may have touched the northern coast of Australia and the west coast of America. He certainly made his last voyage ninety odd years before Columbus reached Americas' east coast and one hundred and two years before Magellan rounded Cape Horn and sailed into the Pacific.
Unfortunately, the Emperor decided it was costing too much money and did not want to open China up to the world - he turned in on himself, his country into isolation and ordered a halt to the voyages and the destruction of all the ships. So, a great historical odyssey was lost to the world. Zheng He died shortly afterward.
Fortunately, some charts had been preserved and some outline plans of the ships, from which a full sized replica of a sixty metre version has been constructed in conjunction with the Swedish Gotheborg3 Tall Ship Society. She is lying in the grounds of the ancient shipyard in Nanjing and can be visited for 50 yuan(about $7.00). It is fascinating to follow his voyages along a massive wall on which they are carved in stone in a continuous line. There is also a large bronze statue, a compass and a massive four tonne grapnel style anchor made out of iron dotted around the yard.
One can only marvel, imagining all the activity and noise there must have been whilst building all of his ships and what the world would be shaped like today if the Ming emperor had continued and expanded the work of Zheng He.
Some other sites you can look at are: http://www.1421.tv/
Zheng He's voyages of discovery - UCLA International Institute
www.chinapage.com/zhenghe.html
Of course if you become fascinated by this giant of history there are many other sites to follow up.
You can read more of Zheng He's exploits in my ebook 'Voyage of the Little Ship 'Tere Moana' by visiting my website www.sailboat2adventure.com

Posted by sailboat2adventure at 19:17 No comments: