Sailing Tips: Rounding up and How to Prevent for Sailors

Rounding up is one of the more annoying things to happen when you are sailing into the wind on a gusty day. It slows your boat down and if uncorrected can put your nose right in to the wind and stall the boat. Then you have to bear away and regain boat speed. Not a good look, especially if there are other boats in the vicinity watching!
The following article from http://www.sail-world.com/ explains clearly what to do when it happens and how to avoid by watching your telltales and competent sail trimming:
'Rounding up is caused by many factors. One is too much wind and force aloft which tends to heel the boat over. This reduces the amount of rudder in the water and thus the rudder’s effectiveness. Another factor in rounding up is that the centre of pressure of wind on the sails is too far aft. This then pushes the aft of the boat downwind and thus the front of the boat upwind.

Our SailTrim clinic discussed this topic and so what we wanted to do was test it out for sure. So last weekend we took out a friend’s Beneteau 373 to test out an anti-round up theory. Read on to find out the results of our experiment:

1. First though, we must first understand wind shear.

The phenomenon of wind shear is pretty easy. Wind moves faster at the top of the mast than it does at water level because the stationary water by friction, slows down the wind the closer it gets to the water. So, if you could see wind you can visualise in your minds eye the water at sea level dragging the wind a little at the surface.

2. Secondly, consider the concept of true wind vs apparent wind: 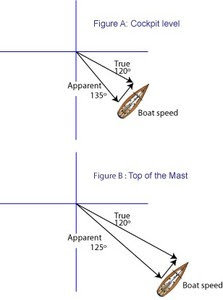 Thus at the top of the mast the true wind is more aft than the apparent wind.

So – the fact is: at the top of the mast the wind is higher in speed and more aft than at cockpit level.

Figure A and B show the boat speed, true wind and apparent wind vectors for cockpit level and top of the mast. Obviously in both cases, the boat speed vector must be the same. The true wind vector is obviously the same direction but due to wind shear it is longer (faster) at the top of the mast. This results then in the apparent wind direction being more aft, in this case from 135 deg to 125 deg.

You should understand that if a sail is sheeted in too tight it creates more heel. This then is exactly what is happening at the top of the mast. Even though at the bottom of the sail you may have perfectly trimmed the sail, the top of the sail is sheeted in too tight against higher wind speed. No wonder you’re getting excessive heeling. And excessive heeling creates roundups.

This is now quite a revelation! It means that the top of the main needs

to be “out” further than the bottom of the sail for it to operate efficiently. This is usually indicated by the top telltale. Often the leeward telltale will be stalling at the top of the sail. Especially in high wind because of the phenomena above.

In the illustration, you can see the top telltale on the downwind side is fluttering. If you let out the main at the top, the wind can reattach to the sail on the leeward side and the telltale will fly smoothly reducing the force aloft.

Understanding all the above. How do we stop rounding up?

Option one: Obviously the first and safe option in higher winds is to reef the sail.

Option two: Let out the traveler which is what most people do when hit by a gust. Just so long as you realize what you’ve done is not twisted the top of the sail out – all you’ve done is let out the mainsail from top to bottom and thus depower the mainsail. This reduces the force aloft and thus the heel. It also moves the centre of effort of wind on the sails forward which reduces tendency to round up. The trouble is that you spend all day fighting gusts with still quite a few involuntary round-ups. 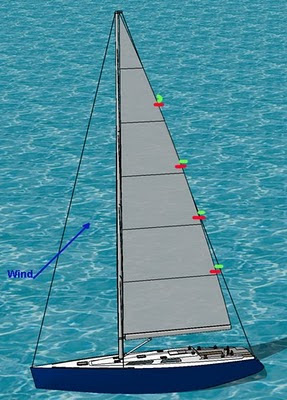 Option three: Let out on the mainsheet. Here again you’ve depowered the entire mainsail to handle the gust. Still, it works.

Option four: Permanently reduce the force aloft by letting out further on the mainsail and tightening up on the traveler. The trick here is to bring the mainsail bottom back in again using the traveler. Yes, bring the traveler to windward up past the center point. Most sailors are reluctant to do this because they’ve been taught that it detaches the wind on the leeward side. But not when you’ve let out the mainsheet. In effect, by letting out on the mainsheet, you’ve allowed the boom to rise up and the leech of the sail to slacken. This creates the desired twist at the top and allows the top of the sail to fly according to its apparent direction. At the same time, the bottom of the sail can fly according to its apparent direction.

What happened on our 15 knot gusty sailing day? Well, not one round up.

So to summarize, the sailing lesson here is when in higher winds bring the traveler up and sheet out the main. You’ll also need to release the boom vang a little. Letting the boom vang out allows the boom to rise which loosens the leech (trailing edge) of the sail and allows the top part to “twist out”. '

You can read much more about sail trimming and techniques in my ebook 'Voyage of the Little Ship Tere Moana' downloadable to your PC, iphone or ebook reader, from my website http://www.sailboat2adventure.com
Posted by sailboat2adventure at 11:27 1 comment: 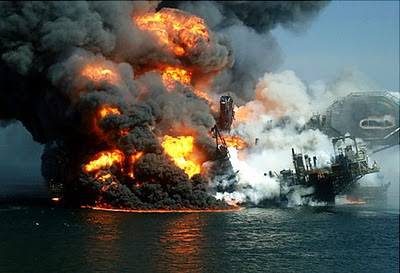 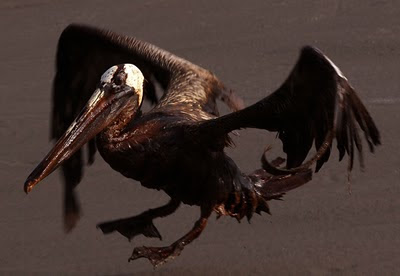 Posted by sailboat2adventure at 13:12 No comments: