With the ever increasing popularity of these systems for cruising sailors, it is timely  to look at the following video to see exactly how it may be advantageous to install such a system on your own yacht. 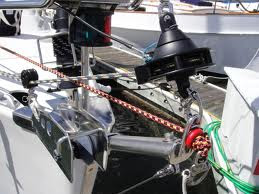 The particular system shown in the video is a Bamar Rollgen Furler from Ocean Sailing Enterprises in Canada. Installation is very simple and can be brought out when required. It rolls out cleanly, fills very nicely and rolls away again easily.
A good sailor of course, will always be keeping a keen eye on the weather to make sure it is taken down in plenty of time preceding any weather changes.
The following is an extract from their website:
Bamar’s roller furlers turn asymmetric spinnaker handling into a simple job and give the short handed sailor the confidence to furl and unfurl from the safety of the cockpit in seconds.

Doyle Sails Australia is the Australian distributor for Bamar’s range of reefing and furling gear. Bamar is a world leader in the field of sail management and furling systems for the yachting industry having designed and supplied equipment to yachts of all sizes.
They also make available a clearcut pdf file which you can download from here:
http://www.bamarusa.com/PDF/rollgen.pdf
Spinnakers can be a problem at the best of times and as a cruising sailor it is great to see more manufacturers producing these systems that work so that they don't have to be watched every second they are up.
Extract courtesy Doyle Sails, video and image courtesy Bamar
You can read more about passagemaking with spinnakers and many more cruising adventures in my ebook 'Voyage of the Little Ship Tere Moana'  and '101 Dollar Saving Tips for Cruisers' downloadable from my website www.sailboat2adventure.com
Posted by sailboat2adventure at 13:40 No comments:

Insurance for your sailboat prior to setting sail on you 'adventure of a lifetime' can prove to be a minefield  - but one that needs to be negotiated and finalised well before your departure date. With the plethora of insurance companies out there it can become a confusing exercise. Once you have narrowed it down to a chosen few, then you need to start asking them some hard questions.
Here is a list of five of those questions, the answers to which will give you a good guide as to the efficacy of the insurers' you are talking to:
1. Does my insurance company expect me to pay salvage costs that should be paid by them? Most people say the main the reason they buy insurance is to cover the 'big things.' The most common types of catastrophic insurance claims are sinkings - which can happen to anyone - or storm claims, which destroy your boat and can leave it in pieces or in someone's back yard. 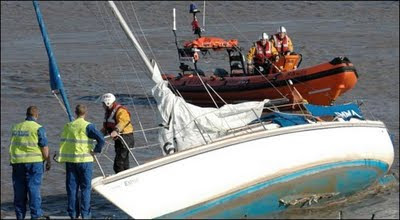 In both of these cases, it is the policy's 'salvage' coverage that will pay to remove your boat from the bottom of the lake or the rocks on the shore. A good policy has separate and full salvage coverage (up to your policy's limits) for the costs to remove the boat that is not less than or limited to a percentage of the 'hull' value (which is the part of the policy that reimburses you for actual the loss of the boat). A bad policy reimburses you for the loss of the boat, but could make you pay some salvage fees out of your own pocket - and isn't that's what insurance is for in the first place?
2. When I have a claim, how much help will I get? When insurance companies handle a claim, there are two schools of thought: those that are 'hands-off' and those that are 'hands-on.' A hands-off insurance company believes you should do all of the work.


With a big claim, that could include finding a salvor, crane company, barge and trucking service on your own, and then reimbursing you. A hands-on insurance company - usually a specialty marine insurer - has access to these unique services 24/7 and wisely negotiates pricing, hires and pays these contractors for you, and can arrange for and even guarantee repairs.
=http://abclocal.go.com&configPath=/util/&site=">
3. Does the policy have 'consequential damage' coverage? In the world of boat insurance, catastrophic losses that include fire, explosion, sinking, demasting, collision or stranding are considered a 'consequence.' For example, when your boat sinks due to rusted, through-hull fitting breaking off, the sinking is a consequence of the broken thru-hull.

Good boat insurance policies include 'consequential damage' coverage for these specific catastrophes. In plain English: if consequential damage is not covered in your policy, almost every sinking or fire could be excluded as a result of 'wear and tear.'
4. Do you want me out of harm's way? A better insurance policy will offer 24/7 emergency claims response that can immediately step in with the necessary resources to prevent further damage. And if you live in a cyclone zone, it will also share the cost of a haul-out to move your boat to high ground or pay a captain to move it to a cyclone hole.


5. What are you doing to reward me? A good insurance policy will give you credit for not having claims and reward you with things like diminishing deductibles that reduce the amount of your deductible for each year you remain claims-free.


If you're not satisfied with your insurance agent's answers to these questions, it's time start shopping around for a better policy.

From my own experience I found Pantaenius Yacht Insurance to be an excellent company to deal with. They send out the forms to you (or online), you fill out all the details and bingo! job done. No awkward questions about crew qualifications and distances off shore etc. as so many insureres insist upon - just a straight forward deal. Fortunately, I never had to call upon their services in anger so I was more than happy.

Everybody has different requirements, so the main thing is to select the company who meets your criteria the best and go with them - good hunting.

You can read more about insurance matters and long range passagemaking in my ebook 'Voyage of the Little Ship Tere Moana' downloadable from my website www.sailboat2adventure.com

Posted by sailboat2adventure at 22:02 No comments:

Sailboat Battery Selection and Installation for Cruisers and Voyage Planners

The subject of sailboat batteries is a never ending discussion, with every sailboat cruiser having his or her strong opinions on what is best and what type to purchase, balance between house and starting, power, location, fixing and maintenance. Discussions can sway between mild and knowledgable to aggressive and stubborn and can even lead to blows exchanged (fortunately only verbal in the main). 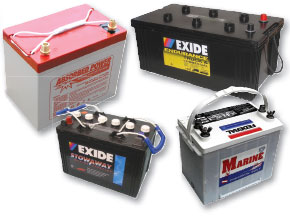 The following article is from Gavin Sorrell of Professional Solar Designs Australia who adds his sensible comments for the cruising sailor to browse and assimilate:
'The battery, reports Gavin is something that boatowners buy, install in the least attractive part of the vessel and then forget, until something goes wrong.'

Together with loss of cooling water, the battery and its associated wiring is probably the prime culprit in disabling boats.
In a car, the battery provides a short burst of high current to start the engine. Then the alternator quickly replenishes the charge so that the battery is seldom below its full capacity. However, in a boat, the engine is run relatively infrequently, often specifically to charge the battery; and other means of charging such as solar, wind or shorepower are available intermittently.
Boat electrical systems are called upon to operate even when no charging is available, which requires a battery that can provide current at a low but steady rate for long periods between recharging. Hence the requirement for a deep cycle battery in addition to the engine cranking battery. 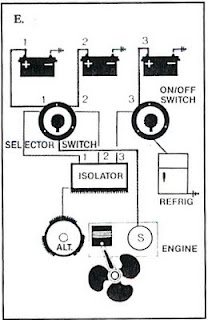 In a traditional battery, lead plates are suspended in an acid electrolyte. The chemical reaction between the lead and the acid creates the current flow. Lead is eroded from the plates and once it is depleted, the reaction slows and current reduces. By applying power from an external source, the chemical process is reversed, lead is deposited back on the plates and the battery is recharged.
The rate of electricity flow, in amps (A) is proportional to the area of lead exposed to the acid. A high current results from many very thin plates in a battery. Such a battery will give a short burst of energy that will rapidly diminish as the plates are eroded. This battery is ideal for starting which requires a high, brief cranking current.
The alternative is to use thicker plates, so that long term surface plate erosion is reduced. But fewer thick plates can occupy a battery case and the lead surface exposed to the electrolyte is reduced, resulting in a battery that can supply only low current for a long time. This is a deep cycle battery, able to supply relatively low current to run the electrical and electronic systems for sustained periods and also able to accept far more charge/discharge cycles than a dedicated starting battery.
Typical criteria to compare battery capabilities are: Cold Cranking Amperage or CCA: An indication of the ability of a battery to crank an engine or for powering winches or thrusters, defined as the discharge load measured in A that a battery operating at -17.8°C can deliver for 30 seconds whilst maintaining the voltage above 7.2 V. 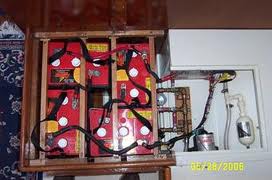 Obviously this temperature is unlikely to be experienced in Australia, but conforms to a global standard.
The 20 hour discharge rating, measured in Amp-hours (Ah): This rating indicates the ability to deliver current over a protracted period. A 100Ah battery theoretically delivers 1A for 100 hours or 2A for 50 hours. But no deep cycle battery should be discharged below 50% of its rated capacity. Also, the capacity depends on the discharge rate due to the rate at which the chemical reaction occurs. So more Amp-hours can be drawn from a battery at a low current rate. That is why the discharge time is specified for the Ah rating, typically 20 hours.
Selecting a battery system that can perform both cranking and deep cycle functions is therefore a compromise. This is one of the main reasons that a boat is fitted with two battery banks, one with a high CCA rating to start the engine and another, often called the house battery, with good deep cycle characteristics to run the electrical systems. The other reason is of course that by having a separate starting battery, it can be isolated from the house loads, thus ensuring that sufficient cranking ability is available to start the engine even if the house battery is flat.'
Article courtesy Gavin Sorrell and Afloat magazine, images courtesy Aflopat magazine and boatfix.com
There is also an interesting article regarding the setting up sequence for your batteries at www.boatfix.com
You can read more about sailboat battery installation and maintenance whilst on passage in my ebook 'Voyage of the Little Ship Tere Moana' downloadable from my website www.sailboat2adventure.com