'The Panama Canal has reopened after being closed to ship traffic because of flooding in the region, officials said.

The canal reopened Thursday, 17 hours after prolonged heavy rains and flooding required that it be closed for just the third time since it was opened 96 years ago.

Flooding in the region forced thousands of people to evacuate their flooded homes. Two 11-year-old children and an adult were missing, Newsroom Panama reported online Wednesday. 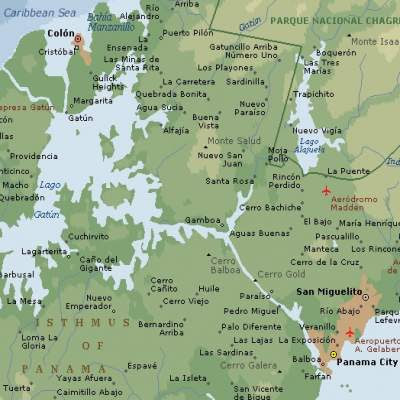 The rains, which forecasters say will hang around for months, damaged Panamanian crops and roads, including the collapse of one to the Centennial Bridge.

The Panama Canal Authority said ship transit was "temporarily suspended" Wednesday because the Alajuela and Gatun lakes were at the highest levels ever recorded, Newsroom Panama reported. The 48-mile-long, man-made shipping channel was closed in 1989 when the United States invaded Panama to depose strongman Manuel Noriega, and in 1915 and 1916 because of landslides, CNN said.

Manuel Benitez, executive vice president of operations for the canal authority, said the closure was necessary because transit through the canal could be affected by the currents of the Chagres River, which flows into the channel on the way to Gamboa.'

This news report from UPI brought to mind my transit of the famous Panama Canal in my own yacht and I post the extract from my ebook 'Voyage of the Little Ship Tere Moana':

'The dinghy pool at the PCYC (Panama Canal Yacht Club, now no more) contains a variety of underwater obstacles to snag the unwary approaching tender. Most of them are sharp and laying at exactly the right angle to slice through or hook into and tear the millimetres thick rubber of the bottom or sponsons. On their second trip, one such of these catches our not so vigilant crew off guard - fortunately only metres from the 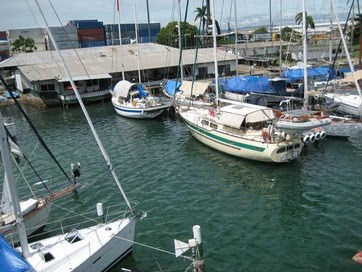 dock - a quick glance over the side shows an ever increasing stream of air bubbles under pressure, racing to the surface(quite fascinating in other circumstances!) and a hasty retreat with paddles foaming the still water follows, taking the Avon back to the dock - fastest she had ever moved under manpower!

Hauled out, upended and inspected, it is found not to be a life threatening rent and can be patched. Naturally, the repair kit is still with our little ship, moored 1.5 kilometres away, and completely innocent of events. So, our intrepid crew begin the usual search by knocking on the few boats that are actually in the marina berths and naturally again, some tender hearted sailor comes to our rescue - sibling crew is usually called up for this kind of incident, with expectations realised. With thorough drying, scuffing and gluing, our crew are able to effect a suitable repair and retire to the bar whilst curing - there is always an upside to any catastrophe!
Many a steamy night follows with our crew frequently sleeping in the cockpit under the stars, only to be driven below when the next deluge passes through. A tropical rain shower is very different in terms of intensity than what they were used to and once below, conversation can be very nearly drowned out with the drumming on her coach roof. She enjoys the coolness of it and is pleased that it washes the salt out of her sails, off the rigging and topsides - she will have to remind them tomorrow to sluice down the teak decks with salt water from the canvas bucket - this keeps them nice and tight by keeping the teak strips slightly swollen and tight up against the black sikaflex caulking.

Next morning she is rudely awakened with a not too delicate bump on her starboard side - this announces the arrival of the Admeasurer, which in number comprises four swarthy Panamanians with very black moustaches and big boots, clumping arou 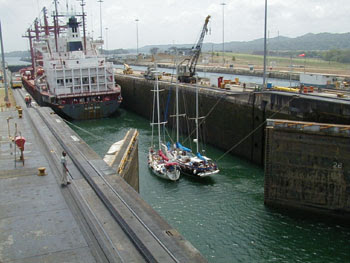 nd her decks and below measuring everything they can lay a tape alongside or around. Because the majority of their work is large merchant vessels, cruising yachts just don't fit into their matrix. A cruising yacht not having a funnel, bu the box on their form requiring an entry, they measure a starboard dorade vent - necessity is the mother of invention! Many curious questions follow until finally, with a bottle of Johnny Walker Black Label changing hands they depart, instructing our crew to be ready for when a Pilot will be delivered for the transit.

Documentation progress is slow and when the final stamp with payment required is to be at the Panama Canal Commission, a $50 taxi ride takes them to the PCC office. This office is positioned mid way along the canal and most inconvenient - but considering ships travel both ways through the canal, there is a certain logic to it being at the Gatun Locks. With document stamped and USD495 paid (transit fee which has increased currently to USD600 plus a USD850 buffer fee - refundable if not used) our crew hasten back aboard to await the arrival of the Pilot.

Pilot on board by 5.45am next day and informs the captain that 6.5knots have to be maintained for the 21 nautical mile journey. Now, she thinks to herself, that means she should be there on the other side and therefore in the Pacific by lunch time. What she doesn't understand is that in between times she has to negotiate the three locks along the way - up and into Gatun Lock, down to Pedro Miguel locks and finally, Miraflores Locks - this all takes time and will probably use up most of the day. The captain is a little concerned that running the engine so hard for so long may cause problems. She knows that the motor is good enough, but lets her captain fret anyway. Running into the locks, rafting up with other yachts, handling the monkey lines as they are hurled down onto her decks from above and bouncing around in the turbulent waters of the locks all goes well and she is rather pleased with herself and her crew.

They had all heard some awful stories of major damage to 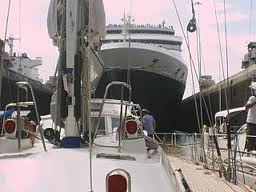 small vessels in transit and were somewhat fearful of this leg of their journey. She felt somewhat intimidated in the Gatun Locks by a merchant vessel whose bow some 15 metres up, loomed forward over her own bow and she thought that it could have given her just a little more sea room.

The turbulence in the locks as the water rose and then lowered was quite dramatic, and she had the crew dancing around her deck constantly watching and adjusting her fenders - she was very protective of her unsullied flanks and did not want them tarnished by some unfeeling merchantman, whose only concern was to get out the other end to continue its pecuniary voyage. She also knew that if she got on the wrong end of a small bump from one of them, her hull would pop open like an egg. The captain having to sign an indemnity to the PCC, was also acutely aware of this.
The captain, perched on the stern rail in the Gatun Locks suddenly spots two large porpoising fish astern and close to the lock gates. They are a pair of very big Tarpon and apparently these fish regularly use the canal system to traverse into the Pacific and vice versa - fee free of course!
Cruising between Pedro Miguel Locks and Miraflores she passes the Pedro Miguel Boat Club to port and smugly notes all the yachts out on 'the hard'. They were in various states of repair and many of them looked like they had been there for quite some time - this club was famous for voyagers returning home for respite before venturing into the Pacific, with many of them never coming back to continue. Obviously, she muses, folks from the Atlantic side - but to her crew, the Pacific was their home and held no such fears. 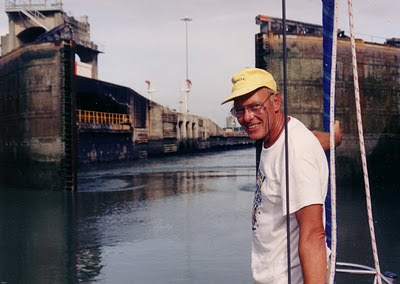 Finally, into Miraflores Lock and the last batch of 'bump and grind', her nose pointing west, the huge massively steel strapped and dripping gates crack open to reveal a sliver of ever widening blue which is her first view of the mighty Pacific Ocean. She feels a jet of excitement pass through her and realises that at last this is the beginning of a great voyage - the crew also seem to be somewhat stimulated and prattle on about how smart they are to get thus far unscathed! Indignantly, she would like to remind them, if it wasn't for her they wouldn't be here at all! She remonstrates by heading for one of the pylons of the great 'Bridge of the Americas', until Anglo crew noticing, brings her smartly back on course and on a heading for the Balbao Yacht Club. She claps onto a mooring, shuts down and releases them ashore and the club bar, to find the first gullible bunch of sailors who will listen to their pathetic babbling! This is the first time using the repaired dinghy in anger again and it holds up well.'
Extract from 'Voyage of the Little Ship Tere Moana'. Images courtesy Google.
You can read more about sailing in the Panama and San Blas cruising grounds in my ebook 'Voyage of the Little Ship Tere Moana' downloadable from my website http://www.sailboat2adventure.com