The following item has been quite widely reported on the internet and yachting press and even though the article is written tongue in cheek, it has yet to be exposed as a digitised fake. There are a number of things that give it away and I draw them to your attention here.

No matter how you jumble the tag words the only report that comes up is the one we have here. There is no serious article and no report on the purported accident from any official agency.

But first, the report:

A terrifying scene at the Point No Point State Park near Seattle unravelled late Thursday afternoon as the iconic lighthouse perched on the northernmost tip of the Kitsap Peninsula unexpectedly collided with a 126 foot mega yacht just before 3 pm. This account from the Kitsap Report: 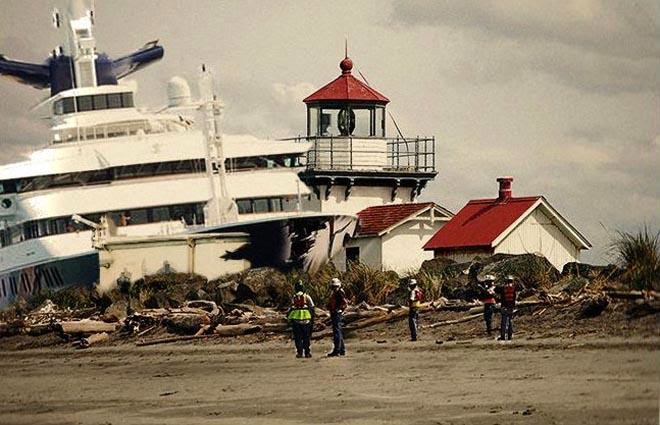 Initial reports from bystanders and park officials claim that the Point No Point Lighthouse made a series of irrational and ill-timed maneuvers in the events leading up to the crash, subsequently obstructing the unsuspecting oncoming boat.

One onlooker described the actions of the lighthouse operator as taunting, claiming that the operator 'was waving her hands up and down and screaming frantically in an aggressive manner just before the wreck'.

The Zune is a 16000 ton vessel owned by former Microsoft executive and billionaire Paul Allen. Built in 2007, The Zune was designed to withstand heavy abuse from man made stationary objects.

Steven Johnson, captain of the Zune and 15 year maritime veteran said 'It came out of nowhere. We are just lucky that no one got injured. There was an obvious error on behalf of the lighthouse operator.'

Lighthouse Operator Sharon Jones did not give a statement to the press, and was reportedly uncooperative with police and coastguard officials.

She is under investigation for negligence and was placed on administrative leave immediately.

Paul Allen informed KR reporters that while he is grateful that no one on board was injured, he will be seeking compensation from Kitsap County for the damages to his boat.

Now, the digital effects: Compare the two images of the positioning of the point-no-Point lighthouse. The vessel would have had to be travelling at and hit the shore at high speed to have arrived at that relative position to the lighthouse. That being the case it would have sustained far greater damage then that shown. Also, the beach shown in the image above is quite shallow.

The starboard hull side is black. What you can see of the port side bow/hull is white.

The deck bow line is still smoothly curved in the image, which of course in reality it would be crumpled.

The implied damage to the bow has been digitally engineered.

The white panel with what appears to be a small crane to the left hand belongs to neither the boat nor the lighthouse…….random insertion?

The accident was reported as happening late afternoon whereas the shot shows the sun angle to be late morning/early afternoon ( unless the newshounds didn’t arrive till next day, which would seem unlikely?).

The lighthouse and outbuildings have been shot in sunlight with high cloud diffusing the light to a degree whereas the vessel has been taken in full sunlight.

No doubt you can find some more mistakes, but I think these are enough to prove it is a fake image.

If, in the event it proves to be genuine (and I throw out a challenge here), the captain finishing up on the same level as the lighthouse keeper would have had a very interesting conversation with that same person?!

You can read much more about cruising and voyaging by downloading my book 'Sailing Adventures in Paradise' including 101 Dollar Saving Tips downloadable from my website http://www.sailboat2adventure.com/

Posted by sailboat2adventure at 11:52 No comments: