There has been much discussion of late about these revolutionary applications for better antifouling of props, shafts and any under water metal fittings of a sailboat or yacht. There are various products on the market, but one that appears to stand out is a New Zealand product called Propspeed which has been developed by Oceanmax International of Auckland, New Zealand.

Everyone is looking for improved product performance and also applications that are environmentally friendly and do not leach or allow toxic chemicals into our oceans.

Propspeed works on the principle of the silicone polymer finish being so slick that all those little guys that want to clamp themselves onto your running gear just cannot get a toehold, fall away again in frustration, leaving your prop, shaft and any other metal skin fittings underwater, clean. We all understand the benefits of clean running gear - no fouling, increased speed of your vessel and the corresponding saving of fuel. With Propspeed we can add the additional benefit of no detrimental effect on the environment.


Having looked at all these possibilities we decided it was time to do something about it and as the boat was going to be hauled anyway, get the Propspeed application to see how effective it will be between now (early spring) and when the boat will be hauled again in March 2010. That will be seven summer months (warm water temperatures, higher growth) 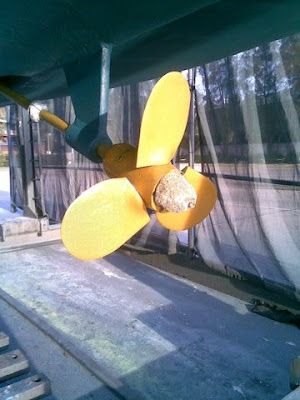 from now and will certainly show a result in that time frame.

Propspeed can be purchased directly with the application carried out by yourself, but then you have no guarantee if things don't work out. By commissioning your local boatyard to do it, you know that with their experience of doing many already, they are going to apply the product professionally, and you can also discuss some kind of warranty situation with them to cover any future problems that may arise.


The other downside to doing it yourself is what to do with the materials that are left over? for an average sized sailboat (30 - 40ft) you would use approximately half of the pack. Once opened it would not keep for a year, so that means disposing of it or finding some other boat owner willing to do the job at the same time as you - and you know how tricky that can be!


Having Propspeed applied professionally is the manufacturers'recommendation. This was the route we chose and it proved to be a relatively painless operation. We sanded down the shaft and prop so it was clean and shiny when the man arrived from the yard. We we

re just a little taken aback when on setting to work he took a much coarser grade (80 grit) of emery paper and roughed up these parts again.


Two coats of etch were then applied with suitable drying time in between. It is the etch that is coloured (yellow, image above). The topcoats of Propspeed Clear were applied with a fine brush and left to dry for several hours before re-launching the boat. The whole job took one hour approximately (above) and when finished a modest bill of $150.00 was proffered - good value indeed if it works. 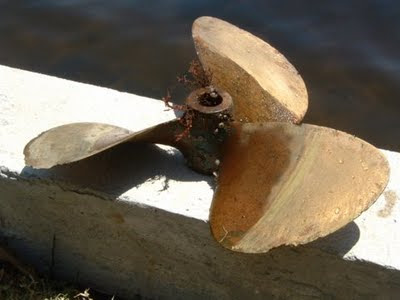 n months and several thousand sea miles. The other prop had Propspeed applied to the outer section of the blades and shows a marked difference between them and the inner areas where there was no application.

You can find out more about this product at the Oceanmax website www.propspeed.co.nz/index.html and find a professonal applicator in your area.


You can read more about anti fouling of sailboats while cruising in my ebook 'Voyage of the Little Ship 'Tere Moana' downloadable from my website http://www.sailboat2adventure.com
Posted by sailboat2adventure at 11:29 7 comments:

Our post back on 11 April 2009 featured a range of ultrasonic anti fouling systems that have come onto the market in recent years. Since posting, I have been contacted by a German company, Impact Tec, manufacturing a similar product, pointing out that I missed them off the list. So, under the heading of balance, the following is an extract from their website:

Your sailing yacht is your pride and joy! No matter how small or big your yacht is, algae, shells and other small animals do not stop from clinging to your favorite. The fouling of the hull is unfortunately not just a visual problem. Sustained algae on your hull can damage commonly used materials and finishes, in the worst case, making them brittle or cracked. In addition, the "beard algae" and mussel fouling deteriorates the lubrication of the hull through the water, resulting in loss of speed, and when motoring, reflecting a higher fuel consumption.

The variety of protective coatings are the traditional way to deal with this problem. Moreover, today there are still many antifouling paints containing toxic ingredients such as copper powder, herbicides and fungicides, which are extremely harmful to the environment.
Is there anyone who has not already had their eyes startled when the bill arrives for the anti-fouling of their sailoatboat? How much money or just work and sweat has already gone into your

protective coating?
Fig.1 shows the "Why Knot '2006 with heavy algae growth on the hull.
Fig.2 taken in 2008 shows the significant difference with 2006.
The Transducer - Ultrasonic generator emitted a multi-layered ultrasonic pattern. In each of algae is a microscopic fluid bubbles called vacuoles. Our digital ultrasonic pattern brings this to vibrate, this leads to the collapse of the vacuole and eventually to the dying algae.
With our Tec Marine Product range, Marine Tec 60-AC, 40 - AC, 20 - AC and AC - 10 it is possible to permanently stop the growth of algae on the ship

's hull. Already infested hulls can be treated with this technology. As the algae are killed off by the ultrasound, they are easily wiped off from the ship's hull.
You can save yourself costly Antifouling expense and the associated incoming order to stay in dry dock.
By stopping the algal fouling on the hull, your boat glides through the water better and it also saves more fuel. Even the cleaning of your rotating ships log is no longer so often necessary.
Do something for the longevity and value of your yacht.
Extract and images courtesy Impact Tec website
The four models listed above feature six, four, two and one transducers depending on the size of your vessel, and range in price from Euros 1195 to 4999. You can visit their website on http://www.impacttec.de/ to learn more about these products.
You can learn more about anti fouling your sailboat when cruising in my ebook 'Voyage of the Little Ship 'Tere Moana' downloadable from my website http://www.sailboat2adventure.com/
Posted by sailboat2adventure at 12:23 3 comments: