Here is a really neat new device for all computer using sailors and folks who want to keep a record of their lifetime voyage experience.

Being able to record your track, lay it over Google maps and include all your favourite images of your voyage along the way is a nice option many will take up. 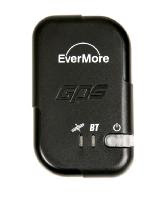 The following is an excerpt from the French 'Voiles Newsletter':

TracBack is a new ultra-mini GPS sensor from Digital Yacht, which measures just 70 x 45 x 20 mm. It incorporates a long-life lithium ion battery pack so that the system can be self-powered.

GPS data is sent through either a standard USB connection directly to a laptop or via Bluetooth for a wireless-type link.

TracBack’s unique feature is the ability to log your trip and record position and track information in its internal memory. When hooked up to a PC, your track is automatically downloaded onto a Google Earth Map with a snail’s trail of the track history. It also comes complete with a useful software application which allows any digital photos you have taken along your route to be referenced and overlaid onto the map by comparing date and time stamp information. This does, of course, rely on you having the same date and time set in your digital camera, but the application is a really nice way of recording where you have been, and building up an electronic log book.

The internal battery lasts for approximately 15 hours and can be recharged using either the supplied mains charger or USB connection. The mind boggles at potential applications, such as tracking vehicles, yacht racing or even sharing your track history with other sailors and friends.
What is even more surprising is the price, at just USD 176, £85, €140 including tax and AUD284.
Reproduced courtesy Marine Electronic Services, Digital Yacht and Voiles Newsletter
You can read more about navigating with GPS and chart tracking in my ebook 'Voyage of the little Ship 'Tere Moana' downloadable from my website http://www.sailboat2adventure.com
Posted by sailboat2adventure at 14:09 No comments:

Cruising the oceans of our planet brings us many times in close proximity to many large commercial vessels. Naturally, by comparison, we are like the flea on an elephants' derriere and wish to give these behemoths of the sea as wide a berth as possible! Hence keeping a good lookout, radar and radar reflectors (see my blog 22 September) are all part of the package to assist in these events.

Like Formula One, new technology is tried out in the heat of Grand Prix racing and eventually trickles down to mainstream auto production. The marine industry is no different.

The latest innovation to come along is AIS(Automatic Identification System).

AIS has been around for several years now and it is law for all vessels over 300 gross tonnes to be fitted with this system. It is only recently however that this technology has been available for recreational use with a range of units coming on the market. It has been embraced enthusiastically by the yachting world and is appearing more and more on the list of equipment to be included on new vessels and fitted for any sailors planning extended passagemaking.

Here is an article from a marine website dedicated to testing new equipment: www. navigate-us.com

visibility or high traffic conditions. AIS displays this information on your Chartplotter. The Simrad-Navico unit to the right is a typical unit.

It is important to realize that AIS is not a substitute for Radar, some vessel do not transmit their positions or intentions. Therefore relying solely on AIS could mean you are unaware of potential hazards.

There are 3 implementations of AIS: Class A, Class B, and receive-only units.

Class B transceivers are designed for boats under 65 feet. Class B AIS provides the boat’s name, position, SOG, and COG.

AIS receive-only units receive messages from vessels carrying Class A or Class B transceivers. These products do not transmit vessel information to surrounding traffic.
AIS is not required on recreational boats. AIS does not detect land­masses or navigational beacons, so it does not replace Radar.

The Navigate-us selection guide addresses receive-only AIS units.
Installation:
An AIS receiver requires a VHF antenna, a GPS input, and a data output to your Chartplotter. Since standard NMEA communications are used, the AIS device does not need to be provided by the same manufacturer as your marine network. Provide a dedicated, clean source of 12 VDC power for your radio that can supply 10 amps.

Display:
AIS information is displayed on your Chartplotter. It’s worth considering how the Chartplotter manufacturer presents the data on the chart. Keeping a clean display with only the most important information is key to ease of use.
Choosing Your AIS Receiver:
If you want other boats to know your vessel’s data, buy a Class B Transceiver. If you only need to know the position of other boats, buy a receive-only unit. Review the Comparison guide for units that meet your requirements.

This is a new category of marine electronics and the products being offered are changing quickly. However the underlying technology remains the same, so there is no need to worry about obsolescence. 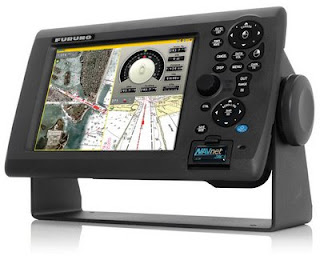 If you were contemplating going the whole hog or re-equipping your vessel, you could look at the latest offering from Furuno. This exciting arrival is chartplotter, radar, GPS, AIS all rolled into one stylish system which also includes a celestial compass and fishfinder.

There are a number of other useful sites you can look up on the net by tapping in 'AIS for sailboats'.

You can read more about radar, identification with commercial shipping and sailing on passage at night in my ebook 'Voyage of the Little Ship 'Tere Moana' downloadable from my website http://www.sailboat2adventure.com/

There are many signaling devices you can use in a man overboard (MOB) situation, and each system is designed for a particular type of event. Safety gear ranges from simple to sophisticated. There are units tailored to help you retrieve a pet that has fallen into the water on a calm day, as well as those that will be indispensable if a crew member gets swept from the deck during a serious storm.

The simplest MOB devices are called proximity systems. The components include a receiver at the helm, which monitors the signal from a small transmitter, or fob, that can be worn by everyone on board. When the signal from a fob is interrupted — by immersion in the water, for instance, or by a distance beyond the effective radius (usually about 40 feet) — it triggers an alarm, marks a chart plotter and may shut down your engine if under power.

Proximity alarms are relatively inexpensive and reliable for a number of recreational situations. However, since the signal can be broken when batteries are low or compromised by line of sight, this type of device can be prone to false alarms. In addition, once the signal is broken, it doesn't return. As a result, those left onboard get a warning that someone has gone over, but it's up to them to locate the victim and make the rescue. This may not be problematic for the crew of a smaller, open boat with great visibility and maneuverability.

Raymarine's LifeTag ($695 with two fobs) is another proximity system. It functions as a stand-alone, but it can be integrated with Raymarine's proprietary SeaTalk network to sound an alarm, mark the MOB position on the plotter and program the autopilot to return to the place where the person went into the water. The system's 30-foot functional radius can be boosted with a second receiver ($469). Each receiver will cover up to 16 transmitters/fobs. Additional fobs are $115.

The MOBi-lert 720i ($899 with two transmitters) by Mobilarm is also a proximity system, but it can be linked through NMEA 0183 to a wide range of compatible GPS and chart plotters. As befits its higher price, it includes a color-coded fob ID scheme, so the skipper knows which fob (or person) has gone overboard. There are optional alarm and engine-cutoff configurations as well.

Another type of MOB technology is equipment that doesn't transmit until it's submerged. These systems boast longer ranges (up to a mile). Plus, the signals can be tracked because they transmit continuously after activation. The Virtual Lifeline by Maritech is one such service. Once the transmitter has been submerged, the engine is shut off. (Instant restarting is enabled with a rocker switch at the helm.) The system can be configured to provide any combination of alarm, GPS marking and/or engine kill function. Virtual Lifeline is available for any propulsion system. The price is $549 for a single-engine boat with two sensors. Fobs are $139 for two, and they must be serviced every two years.

A distinct advantage of water-activated systems is the continuous signal upon immersion, which allows for better tracking. "Let's say a person goes over in a 5-knot current," says Page Read, president of Emerald Industries, which makes a safety device called the Alert2. "Unless you have the ability to track, by the time you get back to where the alarm went off, the person may not be there anymore."

The Alert2 is a rugged component system with a receiver and antenna ($499), transmitters ($239 each) and a handheld radio direction finder ($799). It can be integrated with navigational software from Nobeltec and The Capn. Once activated, the signal can be tracked with the radio direction finder to locate the victim when strong currents or harsh conditions complicate visibility.

When using a water-activated transmission system, it's important for each passenger to wear the transmitter high on the body (usually near the chest). This way, the signal can reach the receiver.

This next class of MOB systems is highly sophisticated. The units are not necessary when you're trying to pull a pet back into the boat in a calm lake; rather, they are for full-blown search-and-rescue missions at sea. I'm referring to personal rescue beacons (PRB), which send s 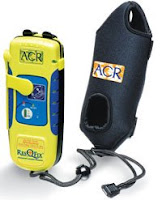 ignals (through manual activation) to the international search-and-rescue satellite system operated by Cospas-Sarsat on 406 MHz.

The McMurdo FastFind Max-G with GPS ($560) transmits a unique identification signal along with your current position. Unlike the EPIRB aboard your boat, it is registered to an individual user, rather than a vessel.

ACR's ResQFix ($600) is a 10-ounce PRB that sends a GPS position along with the rescue signal, broadcast on both 406 MHz and 121.5 MHz. The Vecta3 radio direction finder ($2,000) is a handheld locator antenna that reads all distress signal frequencies. When used with the ResQFix, an at-sea search is conducted until the helicopters and C-130s arrive. It's that good, although hopefully you'll never learn that firsthand.

As of February 2009, the 406 MHz frequency will be the only one monitored by the international search and rescue network, Cospas-Sarsat, which will phase out 121.5 MHz monitoring. This means the old workhorse Mini B by ACR, which transmits 121.5 MHz, is no longer in SAR duty. It certainly has earned its place in many ditch bags over the years and has saved a lot of lives, but its time has passed. Fortunately, the water-activated Mini-B300 ILS ($350) now has a place in ACR's MOB stable. As part of a closed system in combination with ACR's Vecta3 RDF, this little transmitter becomes a top-notch trackable rescue beacon when worn by each crew member.

You can read more about MOB devices and trialing in my ebook 'Voyage of the Little Ship 'Tere Moana' downloadable from my website http://www.sailboat2adventure.com/