The mainsheet traveller on a friends 43ft (13mtre) sailboat was showing signs of wear. The traveller was installed on the yacht when it was built and so now was twenty two 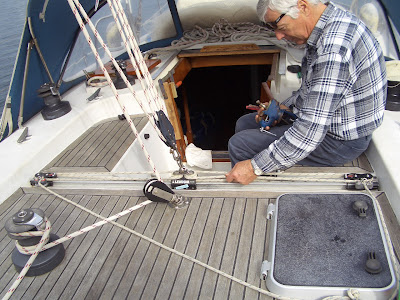 years young. The traveller track itself was still in good order but the bearings inside the car were beginning to disintergrate. When you consider the constant pressure on these bearings when under sail over the years and many many thousands of sea miles, it is not surprising that at some point they will require some attention.

The symptoms of course were that the traveller was wanting less to slide and becoming more difficult to shift and generally getting more stiff - which in turn becomes more of a handicap when racing.

The starting point was to take down 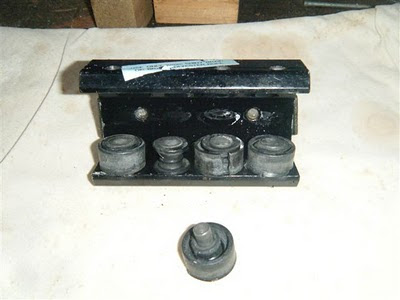 the headlining in the aft stateroom and head/shower cubicle underneath the traveller. Let me tell you from the outset that this was the most time consuming and awkward part of the job. Always working in a confined space, the temperature rises along with the fiddly nature of the work.
This part accomplished we moved topsides to remove the sheet lines from the traveller block and sheave of the traveller and secure the boom off. this meant that the car could slide freely along the traveller rail. All eighteen heavy duty screws were removed from the traveller rail so we could then lift the rail away from its 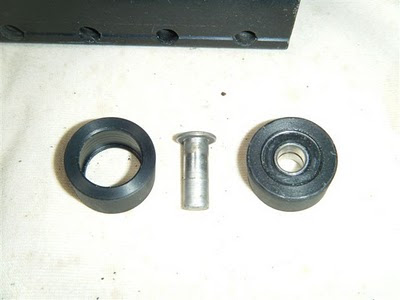 position. The end caps were prised off so that we could then slide off the car. As you can see from the image, the bearings (four each side, totalling eight) were in pretty bad shape with constant wear and corrosion over time having taken their toll.
In preparation ahead of time new bearings had been located which were five millimetres underwidth of the old ones. The reason here was that the difference in diameter was to be made up by pressing on a composite material called Delrin. This was done by Polymer Engineering in Mona Vale, Sydney for a paltry sum of AUD20.00 including a spare set! The 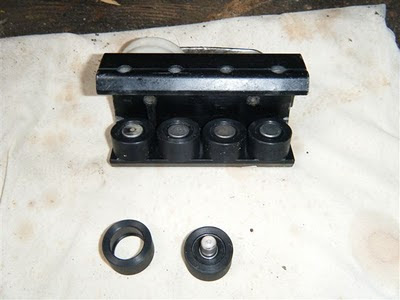 bearings themselves came to AUD246.00.

These were easily placed into position on their pins and the car slid back onto its rail. The track was then firmly remounted in its position on the bridgedeck. Two Harken sheaves were purchased at AUD50.00 each and positioned at each end of the track and using the existing cleats. The lines were fed back through and the car tested for smoothness of operation. Needless to say, it worked beautifully and with the composite 'Delrin' material the car ran very smoothly. 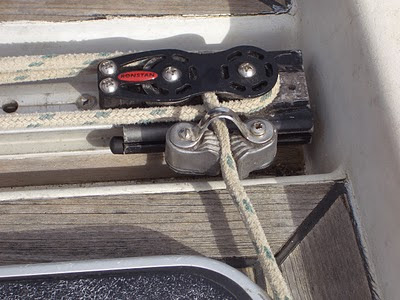 Apart from time, the all up cost of the job of bearings, Delrin press-ons and sheaves was AUD366.00. The replacement cost of a new traveller system from the manufacturer was AUD2000.00+. So, we felt we were well ahead and even if it were to wear again say in five years time, there is a second set of press-ons available.

The boat has been out racing several times since the refurbished car and traveller was refitted and to date is performing very well indeed. Composite materials are used so widely these days, especially so in sailing and yacht building that there is no reason to suspect that the Delrin coated bearings will not give many years of stirling service.

You can read more about sailboat equipment servicing, maintenance and refurbishing in my ebook 'Voyage of the Little Ship Tere Moana' downloadable from my website http://www.sailboat2adventure.com
Posted by sailboat2adventure at 14:30 3 comments:

The future of Americas Cup yacht racing has arrived ahead of schedule and just this week launched in Auckland to huge anticipation and excitement. These new twin hulled catamarans are extremely fast, manoeuvreable but flighty and will provide tight and exciting racing in the 72ft. version in the next Americas Cup to be held in San Franscisco Bay in 2013.

The following is the official media release from Auckland:

New Cat Class Centerpiece of 2011-2012 America’s Cup World Series
Auckland’s Viaduct Harbour showcased a glimpse into the future of the America’s Cup with the debut of the wing-sailed AC45 catamaran. The forerunner to the next generation of America’s Cup boats, the AC45 made its maiden voyage, the first of many sea trials planned over the coming weeks.

“Thanks to the efficiency of the New Zealand boat building industry and a huge effort by our team, the first AC45 is now ready for sea trials just a mere four months after this exciting new multihull class was first conceptualized,” said Tim Smyth, co-construction manager for Core Builders Composites of Warkworth, New Zealand. 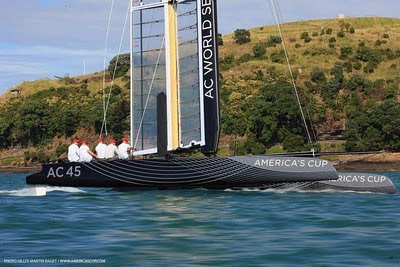 The AC45 is an essential element of the vision for the 34th America’s Cup, which will feature 72-foot catamarans raced on San Francisco Bay in 2013. Focused on creating more on-the-water excitement for both the teams and the fans, the AC45 is designed for both speed and close racing. While capable of closing speeds of up to 30 knots, the AC45 was designed to remain nimble enough to handle the tight race courses planned by America’s Cup Race Management (ACRM).

“The biggest challenge with multihulls is learning how much to anticipate. With the AC45 being a big, powerful multihull capable of tripling the wind speed, your reactions and skills are accelerated. It’s all about being ahead of the cycle,” said ORACLE RACING skipper James Spithill. “I think the AC45 will enable all teams to advance to hard-core race mentality very quickly.”

The AC45 was designed by the ORACLE RACING design and engineering team, which developed the catamaran on behalf of the America’s Cup community. At task was designing a boat that would not only meet the racing criteria, but could also fit inside a 40-foot container, which is the shipping vessel for the America’s Cup World Series.

“The boat was designed for all-around performance so it can be sailed in wide range of conditions, and that means the next America's Cup will see races start on time,” said Ian Burns, ORACLE RACING design coordinator. “Plus it’s a regatta boat, meant for lots of racing, so quick assembly and disassembly was a must to accommodate an active competition schedule.”

The AC45 had to be robust enough to sail through a wide wind range, from 5 to 30 knots, as well as survive in the event of collisions, which are foreseen as teams learn to adapt to multihull closing speeds.

Utilizing the same technology used in the aerospace industry, the hulls are built in carbon epoxy with honeycomb cores, making them extremely stiff and light structures. The sandwich construction involves two carbon skins less than 1mm thick laminated over an ultra-light honeycomb core.

“The new America’s Cup is for those who are hungry for a challenge and the AC45 is really a fresh take on the multihull,” said Vincenzo Onorato, President, Mascalzone Latino.

“We plan to run tight race courses that will force boats to engage with each other, creating really close racing situations. Multihulls are very fast boats and will therefore reach the course boundaries sooner, so races will become a true test of skill and strategy, not just speed,” said Iain Murray, CEO, America’s Cup Race Management and Regatta Director. “The AC45 will fast-track teams to state-of-the-art wingsail technology and crew technique in the first season, and will greatly prepare them for the AC72.”
Specifications:

You can read much more about cat sailing, cruising and passagemaking in my ebook 'Voyage of the Little Ship Tere Moana' downloadable from my website http://www.sailboat2adventure.com
Posted by sailboat2adventure at 11:37 No comments: