It is not often one chooses to haul out a sailboat in the dead of winter. However, in Sydneys' benign climate this is not as bad as you might imagine. A friend of mine discovered the growth on his hull was excessive by June, which is only half way through the annual haul out programme, the next one scheduled being the main annual spring haul out in October.

Whether it is the advance of climate change we don't know. What we do know is that the water temperature this winter stayed much warmer than normal and much longer than normal. It was still almost the summer temperature of 18+ degrees celcius in the middle of June. This appears to have kept the weed growing vigorously and there was quite substantial growth on the hull, particularly around the waterline. 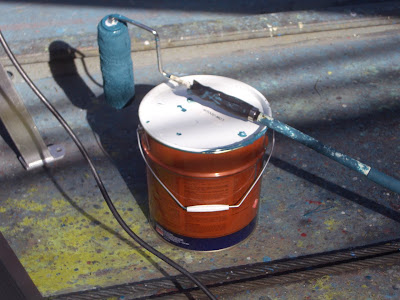 With the winter racing series in mind it was decided drastic action was required. So, on a fine and sunny but cool morning in late June the 43 footer was slipped and work begun.
A semi enthusiastic team of four had been mustered with the object in mind of completeing the job as quickly as possible and getting her back into the water.

The tasks to hand were: Acid wash to clean off scuff marks etc. off the hull, water blast the hull, apply anti foul to the boot topping and as far down the hull as necessary, wet sand the propeller and shaft, apply polish to and buff the complete hull above the waterline. We expected we would use up most of the day to get them all completed, but as we shall see, our industry even surprised us and we were finished much sooner. 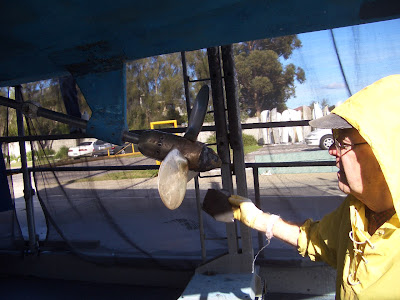 Tools and materials required were: Acid for the acid wash, water blaster (supplied by the yacht club), masking tape for the boot topping line, anti foul, electrical paddle for stirring, emery type paper/cloth, polish, polishing rags, electrical buffer, scaffold stands and planks.
Throw in a liberal dose of humour, a thermal bag containing hot coffee and sandwiches, and we had a possible recipe for completing the job in time for 'splashing' the boat and a quick sail before the winter sun disappeared below the western bulk of Scotland Island.
Under the winter sunshine and beady eye of the skipper we began. After thirty minutes sweaters were being discarded and everyone was working in shirtsleeves. The water blasting was quite simple in the end as the weed, whilst bad enough around the waterline, was much less than anticipated further down the hull, so she was cleaned off more quickly than anticipated.
The acid wash (50 - 50 water, acid) had been applied and allowing ten minutes or so for drying was water blasted off at the same time as the weed growth. 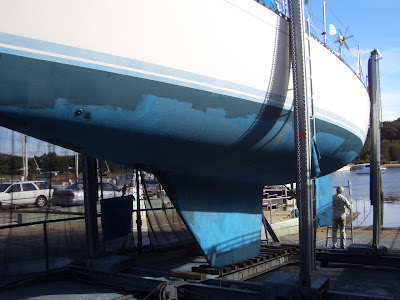 Next, the lid comes off the anti foul paint and is stirred with an electrical paddle. Tape is applied to the boot topping line in readiness for brushing on the anti foul and polish is being liberally slapped on the hull above the waterline, let dry and then buffed up with the electric buffer.
The propeller, whilst the smallest item being attacked, was in the worst shape and was badly encrusted with marine growth. The shaft, whilst not too bad, also needed attention. With all the activity going on around him, the crew member assigned this task, with water and wet sanding emery type paper/cloth, worked on methodically bringing the prop pretty much back to its original shiny and spotless finish - beautiful!
Before we knew it, everything was finished and we were standing back admiring our handiwork (above) - the sandwiches and coffee never tasted better!
She had been hauled early that morning. We were finished by 1:30pm and congratulating ourselves on our 'Teamwork' with still a good chunk of the day remaining to do other things.

You can read more about sailboat maintenance whilst cruising in my ebook 'Voyage of the Little Ship 'Tere Moana' downloadable from my website for sailors http://www.sailboat2adventure.com
Posted by sailboat2adventure at 11:07 1 comment: