For those of you that followed the 34th America's Cup and watched the final excruciating (for a New Zealander) races, you would have been aware of the huge turnaround that the Oracle team achieved. To come from an 8 - 1 deficit to win the next nine races was massive and will go down in the annals not only of America's Cup history, but sporting history in general.

Many questions have been asked as to how this was achieved when Emirates Team New Zealand appeared to have the series and the Cup all tied up after twelve starts, only needing one more win to claim the 'Auld Mug' for the third time.

That's when it all went pear shaped for Emirates Team New Zealand and their pride of New Zealand AC72 boat 'Aotearoa'. Team Oracle, or OTUSA somehow gained the edge and got on top of their foiling racing techniques. It all came down to technology in the end, as it so often does nowadays and the following article gives us some clues as to how OTUSA's 'daggerboard foil control system' worked:

Some people have questioned whether Oracle Team USA had a secret (and illegal) foil control system in their AC72 that helped them defend the America's Cup.

OTUSA has released drawings and photos of their system, which used a simple "mechanical feedback" loop to allow precise control of the daggerboard rake. Helmsman Jimmy Spithill had buttons on the wheel to rake the daggerboard fore and aft in precise increments of 0.5° giving him better control over lift for hydrofoiling. 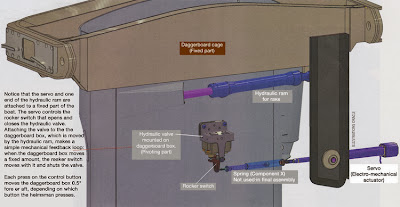 OTUSA designers Dimitri Despierres (mechanical systems) and Eduardo Aldaz Carroll (electronic systems) began work in late June 2013 to help the team gybe better. The goal was to reduce distance lost in a gybe from 150 meters to 30 meters. To do this the engineers needed to deal with the problem that board movement varied depending on hydraulic pressure, making it impossible to control lift. What they needed was a way to move the board a fixed amount independent of the pressure and drag load on the board. Within a month, mechanical engineer Alex Davis developed a test bench with a servo control, hydraulic valve and hydraulic ram to simulate movement of the daggerboard box (see photo below).

Once the test bed system worked, the system was tested on board. Accuracy was fine, but it reacted too slowly. Mechanical engineer Neil Wilkinson and hydraulics specialist Rolf Engelberts improved the system to improve response speed and make everything more reliable and robust.
The hydraulic ram for rake is not visible in the photo below, but you can see the rams for board cant, as well as the daggerboard cage and daggerboard box:


Rendering of AC72 daggerboard cage below. The cage is fixed in the hull. The daggerboard box moves fore / aft (rake) and side-to-side (cant) within the cage.

OTUSA wanted to make sure their system complied with the AC72 Class Rule. They filed a "Public Inquiry" to the Measurement Committee and got approval on 8 August 2013 - only a month before the America's Cup Match was to begin. Team New Zealand then tried to have OTUSA's system ruled illegal but the Measurement Committee stood by their initial decision and the International Jury ruled that New Zealand's protest was made too late, but would not have succeeded even if it had been filed on time. The marked up schematic below was part of Team New Zealand's submission. OTUSA eliminated the spring labeled "Component X" making the TNZ protest moot. 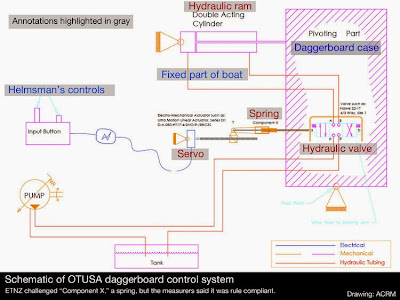 For all that, the question remains unanswered how it was that OTUSA mastered this system in just the one 24 hr period 'Lay Day' they had before going into race 13? Maybe there is more yet to come?

You can read much more about sailing and the cruising lifestyle in my book 'Sailing Adventures in Paradise' downloadable from my website http://www.sailboat2adventure.com/


Posted by sailboat2adventure at 12:01 No comments:

Many times I have reminisced over the six month period I spent preparing/refitting my boat for my voyage from the UK to New Zealand. Many long hours of decision making, purchasing (including driving to many far off places to pick up urgently needed bits/parts to complete a job), installation and plain hard slog went into achieving the final result - a well found and equipped 43ft fast cruising yacht, a great sailer and robust enough to handle anything Mother nature could throw at us.
As I was living aboard during that time with Dale, who was a meticulous installer and fitter of just about any piece of equipment that came into his hands, it was a joy to rise most mornings and attack that days task. From time to time, things as always don't go to plan, and that is when a halt was called for and a retreat beaten to the nearest pub for a couple of quiet ales to discuss the problem. In Shoreham, neighbour to Brighton, this was not a problem as the 'Local' was positioned beside the marina office just a short stroll from our berth! Suffice to say a plan would be hatched over a drink or two, solution/compromise generally found and back to work to complete that particular task.
Every voyage planner has different requirements for his vessel and that's as it should be. So you can easily see the vast range of gear that these requirements can encompass. The following is a refit list from ocean voyager owners Mike and Cate and their Morgan 41ft Out Island ketch 'Horizon':

'........We have certainly been busy on Horizon the past couple years! While we have hired some of the work done, much more than I ever would have in the past, a lot of this was our own handiwork. I am lucky to have prior cruising experience so a lot of the decisions in picking gear was based on that, but then my career as a computer engineer makes me add other, more complex stuff that some see as superfluous which means Cate and our neighbours look askance at some of the things on this list. Sailors tend to have strong opinions and brand loyalty - I just hope all this stuff works together :) Yes I know that little of the expense of all the gear we are adding in this refit will be recovered when/if we have to sell her but we need a little higher level of comfort and safety that we did before.Below are most all of our projects to date for Horizon loosely grouped into categories. As we write more about items they will turn into links that will click through to the description.

I learned from cruising the last time that the part you do not have is the one that is going to break. I worked with a local shop to find and get the parts for our 1995 era Perkins Prima M60 diesel engine.

This looks a very daunting list and indeed it is. These folks obviously had substantially different requirements than what I had several years previously, largely due to the advances in computer technology, electronics, phone/entertainment systems etc. Mike being a computer engineer obviously had a head start in that department.

These tasks are approached one by one and ticked off the list as you go. Personally, I used a thick black marker pen drawn through the middle as each task was completed. For many weeks, not much progress appears to have been made. But one day you notice that a line is drawn through half or more of the items and suddenly it seems that the end is in sight and this is rather satisfying. From then on, the tempo and enthusiasm rises quite sharply until one day you have arrived at the finish and there are just a few odds and ends to be finalised.

Then you have to seriously start thinking about when you are going to leave port and set sail?!

You can follow Mike and Cate's adventures on their blog http://svhorizon.blogspot.com.au/

You can read much more about offshore cruising in my book 'Sailing Adventures in Paradise' by downloading it from my website http://www.sailboat2adventure.com/
Posted by sailboat2adventure at 14:00 1 comment: