Now with these systems you can track your yacht/vessel anywhere in the world.

Have a look at 'Kokomo' in the Google Earth sample. You can zoom right down to where she is moored in the Caribbean - BVI's when I looked - fascinating!

OceanTracker - Yacht Tracking
We can track your yacht anywhere in the world down to 3m accuracy. There are numerous options for this core satellite service, including remote monitoring, polling, telematics, intruder alarms plus geofencing. Click here to view a live example of the SuperYacht Timoneer. Alternatively, please have a look at the OceanTracker information website.
Now available in Google Earth!
Within the Google Earth high resolultion satellite imagery you can fly from space directly to your yacht location. Updates to the position are automatically altered within Google Earth. Once you have Google Earth installed (available for download here) you can view a l

ive example of the Superyacht Kokomo by clicking here.
Click Here to order OceanTracker.
Reproduced courtesy of OceanWeb and OceanTracker
You can read more about satellite navigation in my ebook 'Voyage of the Little Ship 'Tere Moana' on my website www.sailboat2adventure.com

Posted by sailboat2adventure at 10:55 No comments: 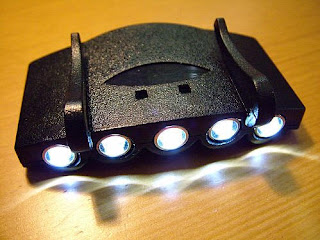 Lightweight, compact light engineered to withstand extreme conditions and rugged use. Quick!Light is powered by lithium coin cell batteries for 20-48 hours of ultra bright light from three LED bulbs with 10,000+ hours of burn time each. Weighs only 1.24 ounces with batteries. Water resistant. Attaches to hat for the most practical, hands-free light source available. Quick!Light is an essential tool for the professional and recreational outdoorsman, 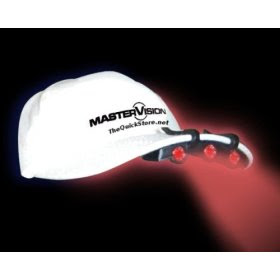 These lights can be purchased as a clip on accessory or built in to the peak and are operated at the push of a button.

Whilst they have some gimmick value and no doubt could be quite handy for looking into difficult to access areas at night, serious sailors are unlikely to use them extensively and certainly not at night on deck.

Night vision is paramount whilst on watch and these led lights are quite powerful. It would be too easy to turn the light on to look at something and then unconsciously swing your head around and blind the other person on watch - I would suggest the red light variety would be better for sailors as the light impact would be far less and they would also be more suitable for viewing charts etc.

Fortunately they can be turned on and off at the push of a button, and as they have arrived on the market we will no doubt see them everywhere for some time to come. If you are planning on falling overboard at night a good idea would be to sew a chin strap to the cap so at least it remains in position! This would assist the searching vessel to get back to you rather than chasing a floating and brightly lit cap!

You can read more about night vision when sailing in my book 'Voyage of the Little Ship 'Tere Moana' on my website www.sailboat2adventure,com
Posted by sailboat2adventure at 10:12 No comments: 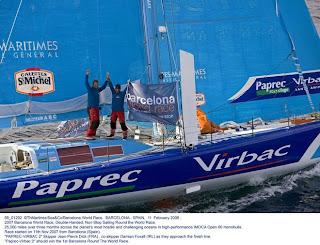 Damian Foxall tonight became the first Irish sailor to win a non-stop round the world race, crossing the finishing line in Barcelona shortly before 9pm following almost 93 days at sea.
The Kerry man, who chronicled his progress in the gruelling mile marathon in a series of Irish Timescolumns, triumphed in the Barcelona World Race on board the Paprec-Virbacwith French co-skipper Jean-Pierre Dick.
Foxall and Dick sounded the cannon at the finish line at 8.49pm Irish time, jumping in celebration having covered the 28,329 mile voayge without a single pit stop.
The Franco-Irish pair were pushed all the way by Alex Thompson and Andrew Cape on the second-placed Hugo Boss but successfully managed to keep their rivals at arms length, finishing with a comfortable lead of approximately 400 miles.
Earlier today, Foxall spoke of his relief and excitement as the finishing line beckoned.
"We're certainly looking forward to getting ashore now," he said. "We've been pushing aside thoughts of the finish but it's always in the back of your mind.
"You try and force yourself not to think about it, but now it's so close we can feel the coast getting nearer and we're really looking forward to getting there. Personally, I'm really looking forward to seeing my wife and new son - I've really missed them a lot."
Robert Dix, president of the Irish Sailing Association, was among those to offer his congratulations to Foxall and Dick.
"This is a huge achievement by Damian and JP. They have battled with arctic weather, massive storms and indeed suffocating heat on their journey to bring their yacht back to Barcelona," Dix said.
"It is effectively winning a Grand Prix race, while climbing Mount Everest. Irish people with an interest in sailing have been following this race since November 11th and Damien has proved to be a wonderful ambassador for sailing and indeed for Ireland."
Reproduced courtesy the Irish Times
Image reproduced courtesy http://www.yachtsandyachting.com/
You can read more about cruising the oceans of our planet in my ebook 'Voyage of the Little Ship 'Tere Moana' available on my website www.sailboat2adventure.com
Posted by sailboat2adventure at 11:40 No comments: 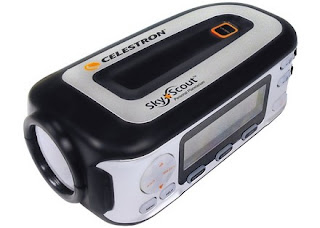 Here is a nifty piece of technical equipment for stargazing. It will very quickly identify bodies in the night sky and be of great assistance for astronavigation using celestial bodies other than the sun or moon.
One of the most difficult things about getting into astronomy is having the information about each planet, star, or nebula available while you are star gazing. Not only does the Celestron SkyScout put that information at your finger tips, but it will also show you where each one of those objects are.
Features:
The SkyScout will tell you what object you are looking at.
SkyScout tells you when you are on target.
The SkyScout personal planetarium puts the knowledge of an expert astronomer in the palm of your hand.
240 x 80 Graphic LCD display with red LED backlight.
GPS alignment
Astronomy is a really great activity that has tons of benefits and really no downfalls, except maybe sleepless nights spent star gazing. There is the opportunity to learn great things about our universe; although, there is so much information to learn it would be impossible to learn it all without a lifetime of study. Celestron calls the SkyScout a personal planetarium and it is truly full of a planetarium worth of information.
The SkyScout will not only tell you about the planets and other celestial bodies, but it will also show you where they are. As you look into the SkyScout it will show you which direction you need to go, and indicate when you get to the object you want to see. The SkyScout contains information on 6000 Stars, 1,500 Double & Variable Stars, 88 Constellations, over 100 deep space objects including Galaxies, Nebulae & Star Clusters, and over 200 audio descriptions of the most popular celestial objects.
The SkyScout contains an LCD screen that is used to display information about each object you view, to select objects you want to view, and display all other information. The headphone jack allows you to hear as the SkyScout speaks out the information about each object you view.
In order to make sure the SkyScout points you at the correct object it uses GPS to align itself to your current location. GPS alignment is performed every time you turn the SkyScout on. This ensures that the SkyScout is always accurate when you use it.
The SkyScout also comes with a carrying case. This case has extra pockets for storing extra papers or even the documentation for the SkyScout.

The SkyScout is not very big or heavy, but it is about the size of a large paperback book. .
The left side of the SkyScout is where the LCD screen and most of the buttons reside. The buttons include a Four-way control, Brightness: Increase/Decrease, Volume: Increase/Decrease, Power, Identify, Locate, GPS, Main Menu, and Help. The LCD screen is fairly plain and not in color. The backlight is red and the text is black. This is helpful for nighttime viewing because the red backlight is not as offensive to your eyes as a white backlight would be.
reproduced courtesy of JusTech'm.com
You can read more about Astro navigation in my ebook 'Voyage of the Little Ship 'Tere Moana' which can be downloaded from my website www.sailboat2adventure.com
Posted by sailboat2adventure at 22:40 No comments:

Longitude and latitude. The earth can be regarded as a spherical object, and since we're dealing with a 3-dimensional shape we need coordinates of a different form than the usual x- and y-axes. Though adding an extra z-axes would make sense for submarines, we will most likely be found on the surface of this sphere while using another system of coordinates, that covers our planet with imaginary lines called meridians and parallels. All these lines together provide the grid which enables us to describe any position in longitudes and latitudes.
The obvious place to divide the Northern and Southern Hemispheres was the equator. But the division of the Eastern and Western hemispheres was the source of much political turmoil. Greenwich (Great Britain) won, placing for example The Netherlands in the Eastern and Ireland in the Western Hemisphere.
It takes the earth 24 hours for a full rotation of 360°. Thus, every hour we rotate 15°longitude.
When it is 12:00 Greenwich Mean Time (GMT) - anywhere in the world - it is 12:00 Local Time in Greenwich and 24:00 Local Time at the other side of the planet: 180° E or 180° W: the date line. Crossing this special meridian changes not only the hour but also the date.
The North Pole has a latitude of 90° N and the South Pole 90° S. The meridians cover twice this angle up to 180° W or E. Meridians converge at the poles, whereas parallels run parallel to each other and never meet. All meridians and the equator - the biggest parallel - form great circles, and the remaining parallels form so-called small circles. A great circle divides the earth in two exact halves.
Most sailors will actually notate seconds in metric fractions of minutes: 42° 21',5 N , 71° 03',6 W or 42° 21'.5 N , 71° 03'.6 W
On small scaled charts we want to be accurate within one minute or one nautical mile. On larger scaled charts the accuracy is more likely to be within a tenth of a mile (a cable).
If the earth were a perfect sphere with a circumference of roughly 40000 kilometres all great circles - meridians plus the equator - would have the same length and could be used as a distance unit when divided into 360 degrees, or 360° x 60' = 21600' minutes. In 1929, the international community agreed on the definition of 1 international nautical mile as 1852 metres, which is roughly the average length of one minute of latitude i.e. one minute of arc along a line of longitude (a meridian). Or to put it shortly: 1 nm = 1'
We are now able to describe any position in latitudes and longitudes. Moreover, we can state the distance between two of those positions using nautical miles or minutes. All we need now is a proper way to define speed. For that, sailors use knots, the number of nautical miles an hour.
Reproduced courtesy Bowditch Navigation
Map reproduced courtesy WorldAtlas.com
You can read much more about navigation for sailors on my website www.sailboat2adventure.com


Posted by sailboat2adventure at 19:07 No comments: