The recent sinking off the Brazil coast of the Canadian training vessel 'Concordia' is a sad and shocking loss, not only to the sail training world and all sailors everywhere, but also to the 'Tall Ships' organisations around the world. 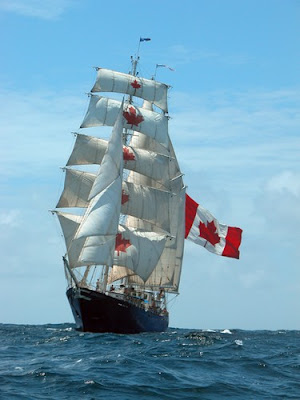 She was a beautiful example of a sailing ship and under full sail evoked the high romance of the 'age of sail'.

Fortunately no lives were lost which is a testament to the excellent ' at sea' drills in which the crew and students had been trained.

Obviously in time a full investigation and report into the incident will be forthcoming, but in the meantime here is an extract from the first interview of Captain William Curry:

"The ship's captain, William Curry, has said although the Concordia's crew had prepared the day before for what they anticipated would be rough weather, the ship suddenly keeled.

When it keeled again the ship's sails were exposed to the powerful wind and within 15 seconds the boat was lying on its side and began to sink. The captain said it slipped beneath the waves 30 minutes later.

Curry called it a miracle that everyone on board made it into rafts and survived after the Concordia apparently experienced a weather phenomenon known as a "microburst" - a sudden, violent downdraft of wind - that instantly crippled the vessel Wednesday.

Sawyer said he hadn't heard of the phenomenon before, but that investigators would get expert opinion on it."

Extract courtesy Winnipeg Free Press
This term of 'microburst' in relation to weather was a new one on me as well, so I thought we would take a look at this weather phenomenon.
Anyone who has an interest in flying would know what 'wind shear' is and it would appear that a 'microburst' is the event that would cause it.
The following item comes from wikipedia:

The term was defined by senior weather expert Tetsuya Theodore Fujita as affecting an area 4 km (2.5 mi) in diameter or less, distinguishing them as a type of downburst and apart from common wind shear which can encompass greater areas. Fujita also coined the term macroburst for downbursts larger than 4 km (2.5 mi), a scale of size known as the mesoscale.

A distinction can be made between a wet microburst which consists of precipitation and a dry microburst which consists of 'virga'. They generally are formed by precipitation-cooled air rushing to the surface, but they perhaps also could be powered from the high speed winds of the jet stream deflected to the surface in a thunderstorm (see downburst).

When rain falls below cloud base or is mixed with dry air, it begins to evaporate and this evaporation process cools the air. The cool air descends and accelerates as it approaches the ground. When the cool air approaches the ground, it spreads out in all directions and this divergence of the wind is the signature of the microburst. High winds spread out in this type of pattern showing little or no curvature are known as straight-line winds.

Dry microbursts, produced by high based thunderstorms that generate little surface rainfall, occur in environments characterized by a thermodynamic profile exhibiting an inverted-V at thermal and moisture profile, as viewed on a Skew-T log-P thermodynamic diagram. (Wakimoto, 1985) developed a conceptual model (over the High Plains of the United States) of a dry microburst environment that comprised three important variables: mid-level moisture, a deep and dry adiabatic lapse rate in the sub-cloud layer, and low surface relative humidity. 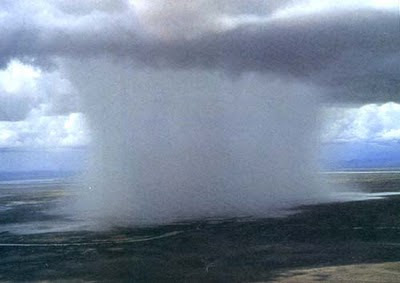 Wet microburst:
Wet microbursts are downbursts accompanied by significant precipitation at the surface which are warmer than their environment (Wakimoto, 1998). These downbursts rely more on the drag of precipitation for downward acceleration of parcels than negative buoyancy which tend to drive "dry" microbursts. As a result, higher mixing ratios are necessary for these downbursts to form (hence the name "wet" microbursts). Melting of ice, particularly hail, appears to play an important role in downburst formation (Wakimoto and Bringi, 1988), especially in the lowest one kilometer above ground level (Proctor, 1989). These factors, among others, make forecasting wet microbursts a difficult task.
Extract courtesy Wikipedia
So, you can imagine then the Concordia sailing along under reduced sail - she was sailing under topsails only - in moderate conditions and suddenly being hit by this microburst, heeling over, the downdraft filling her topsails and pushing the vessel further over until she was in a full knockdown situation. With the mast and topsails in the water and being held down, the sails would immediately fill with water, adding to the overall inertia. From there, the stricken ship could not right herself, and sank very quickly.

It must have been a sad and shocking sight for the crew and trainees watching their home of a few minutes before slipping from sight so rapidlly.
There will be many lessons learnt from this incident and the final report will be anticipated with great interest - I only trust it does not develop into a witch hunt into the captain and crew, who, in the event were responsible for a miraculous saving of the lives of all souls on board.
Finally, the good news is that a sister ship will be built to continue the training tradition of the Class Afloat sail training school in Lunenberg, Nova Scotia.
You can read more about unusual weather phenomena and heavy weather sailing in my ebook 'Voyage of the Little Ship 'Tere Moana' downloadable from my website http://www.sailboat2adventure.com
Posted by sailboat2adventure at 14:41

YoBit lets you to claim FREE CRYPTO-COINS from over 100 unique crypto-currencies, you complete a captcha once and claim as many as coins you can from the available offers.

After you make about 20-30 claims, you complete the captcha and keep claiming.

You can press claim as many times as 50 times per one captcha.

The coins will stored in your account, and you can convert them to Bitcoins or Dollars.

Are you tired of looking for bitcoin faucets?
Triple your claimed satoshis with this amazing BTC FAUCET ROTATOR.