Sailing recently with friends in southern waters we came upon a cardinal mark which created a major debate.

All being old hands, we all had definite opinions on this particular mark and would not be easily swayed to anothers' opinion!
It was close to the coastline and marking out a hazard of rocks near to a 'current powered' electrical generator tower installed in the channel. Because of the limited space, and without a very close scrutiny, this mark could be interpreted in several different ways.
This in fact is what happened, and the argument was still raging when the mark disappeared out of sight around the point. Eyes now looking forward to the next stage of our journey the offending mark was promptly forgotten!
However, it is a reminder that these cardinal marks are there for a purpose and it is good seamanship and practice to make ourselves totally familiar with the four types of cardinal marks.
The word cardinal comes originally from the four cardinal marks on the compass, rotating in a clockwise fashion, North, East, South and West. 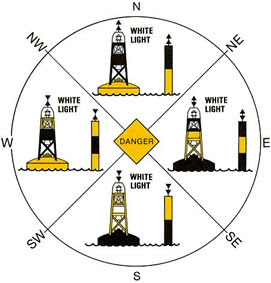 The chart to the right illustrates this buoyage system very well.
Note the yellow and black banding denoting the difference between North, East, South and West.
For night recognition the white flashing lights also the face of a clock/watch e.g. North is a continuous single flashing light, East is three flashes(3 on the clock), South is six flashes(plus a long flash so it is not confused with West) and West is nine flashes(9 on the clock face).

When you have decided which mark it is you are looking at, you then have to determine where the hazard is, or alternatively, where the safe water is.

Waterproofed cards showing this bouyage system are generally available from any recognised chandlery.

Keep one on board at all times posted to a bulkhead by your navigation area.

You can read more about buoys and bouyage systems in my ebook 'Voyage of the Little Ship 'Tere Moana', downloadable from my website http://www.sailboat2adventure.com