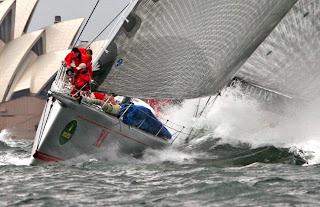 December 21, 2007 - 10:09AM
A cluster of awesomely fast and modern boats, a trio of sprightly octogenarians and a handful of former football stars are set to add colour to a potentially record-breaking Sydney to Hobart race this year. Around 80 yachts drawn from around Australia and overseas are set to sail south on Boxing Day. Wild Oats XI will bid to become only the second boat after Morna (1946-47-48) to take line honours in three successive years.
While the withdrawal of New Zealand boat Maximus with a damaged keel removed one particularly dangerous rival, the NSW maxi and betting favourite should still have plenty of competition for the honour of reaching Hobart first. New British maxi City Index Leopard looms as an especially formidable challenger, especially in strong headwinds. Victorian maxi Skandia, the 2003 line honours winner, should also be up near the front of the fleet.
Ebullient Englishman Mike Slade, the owner of City Index Leopard, said he would he feel ambivalent if he was fortunate enough to get to Hobart first and deny his Wild Oats XI counterpart Bob Oatley a record equalling win.
"It's rather like your mother-in-law driving your brand new Ferrari over a cliff, you don't know whether to be happy or sad about it," Slade said.
Connections of Wild Oats XI and City Index Leopard believe their boats could smash the existing race record by between four and ten hours given favourable weather conditions.
Irrespective of the impressive technology and sailing acumen aboard the fancied vessels, weather patterns will invariably make or break each boat's prospects of success. A drop in wind can wreck a yacht's handicap hopes while a rising breeze and strengthening seas can literally wreck a boat. Size is irrelevant and almost every Hobart claims a high profile victim. Rarely does a year pass without one of the favoured big boats failing to finish with Maximus the major casualty last year.
"One is always aware in the Sydney to Hobart there are three things you've got to do," Slade said. "You've got to sail the right course, you've got to get there and you've got to cross the line first, the most important of those is getting there in one piece."
While the race attracts some of the most modern and expensive boats around, it still also draws weekend sailors who are essentially amateurs and remain true to the original Corinthian ideals of the event.
At the opposite end to the imposing 30-metre maxis is the 9.99-metre Western Australian yacht Palandri Wines Minds Eye, the smallest boat in the race.
Reproduced courtesy 'Sydney Morning Herald'
Keep up to date with this years' Sydney Hobart classic on my website www.sailboat2adventure.com
Posted by sailboat2adventure at 14:18