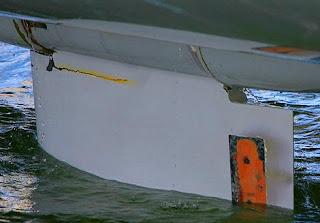 New Zealand maxi 'Maximus' taken out of this years Sydney Hobart classic with cracked keel.
This article reported by the Sydney Morning Herald, Tuesday 18 December 2007.
THE co-owner and skipper of Sydney to Hobart favourite Maximus was close to tears yesterday when a severely damaged keel forced him to withdraw the Kiwi super-maxi from the bluewater classic.Bill Buckley had no choice but to pull the 30-metre yacht out of the race immediately upon inspecting the damaged keel when the boat was lifted onto a dry dock at Woolwich yesterday afternoon.
But as gut-wrenching as the decision was, Buckley also realised how perilously close he and the seven-member crew, who were delivering the boat from Auckland to Sydney for the race, had been to ending up overboard in the Tasman Sea on Sunday morning.
"We have had catastrophic failure and we won't be doing the Hobart this year," said Buckley, an engineer. "We will be going back to the drawing board to build a better keel. I am gutted, we have been working on it since the mast [collapsed in last year's race] and we have tried to do everything as best we could."
A large, 40cm horizontal crack from the fore of the keel just below the hull was clearly evident. It was also apparent that the entire keel was very nearly lost, which would have caused the mulitmillion-dollar yacht to flip in seconds and which would have either thrown crew overboard or trapped them underneath the boat. A huge bang had shuddered the boat on Sunday morning when it was 115 nautical miles from Sydney.
Even as the dockyard workers were lifting the 30-tonne boat by crane yesterday afternoon there were serious concerns that the keel might fall off.
"It was very close, we could have lost the boat quite easily, we took all precautions, we had lifebelts and everyone was in a lifejacket, we were worried," said Buckley of the 20 hours spent at sea after the bang.
A container ship on its way to Sydney had sheltered Maximus after Buckley had radioed an emergency call and Sydney Water Police also sent a vessel to the stricken yacht to accompany it as a precaution. Buckley said it would cost about $50,000 to $100,000 to replace the keel, which he intended doing to prepare the boat for the 2008 Sydney to Hobart. He said the revolutionary, retractable canting keel might have been "too complicated", although the keel had been used for two years of heavy sailing without a problem.
It is still unknown what caused the damage to the keel.
Maximus' withdrawal leaves the three remaining super-maxis, 2005 and 2006 victor Wild Oats XI, 2003 winner Skandia and the UK monster City Index Leopard to fight for line honours.
Up until yesterday afternoon's dry dock inspection of Maximus' damaged keel, everyone, including skipper Buckley, was confident the Sydney to Hobart line honours contest would be a four-way battle. But as she was cradled in the huge slings it was obvious there would be no quick fix. City Index Leopard motored past at one point, its entire crew standing silent and looking keenly at the keel. It was almost a funeral procession.
Leopard owner Mike Slade immediately came on dock to commiserate with Buckley.
"It is a great shame, we have sailed against Maximus in offshore races and she is always very quick and we always knew we had a keen Hobart race with Maximus and Wild Oats XI - the top three boats in the world were all together," Slade said. "Now there are only the two."
Slade has been dismissive of Skandia, believing it was off the pace. Skandia's skipper Grant Wharington has been critical of Leopard in the past, claiming the UK boat was too fat to win.
Slade said Maximus had been "way ahead in the world with the technology, but it had its problems". Maximus' keel is telescopic and able to be raised between 4.5-6.5m as well as canting. Slade said he had wanted such a radical keel for Leopard but the designers and engineers could not make the specifications work. Leopard, which is a much heavier boat than Maximus, has a solid canting keel that is 5.6m long.
Reproduced courtesy of Sydney Morning Herald.
Read more on repairing damaged keels in my '101Dollar Saving Tips for Sailors' on my website www.sailboat2adventure.com