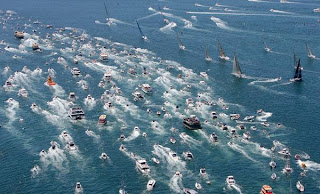 Wild Oats XI is maintaining its place at the front of the Sydney to Hobart yacht fleet.
The New South Wales maxi is leading from British boat City Index Leopard, with Victoria's Skandia in third place.
The fleet of 82 is tipped to enjoy freshening north-easterly breezes through the afternoon and into the evening before a forecast southerly change in the early hours of tomorrow morning. Earlier. hat-trick chasing Wild Oats XI struck the first major blow of the race by beating its rivals through Sydney Heads.
Bidding to become only the second boat in the history of the event after Morna (1946-47-48) to take line honours three successive times, the maxi made a blistering start. The boat went through the Heads first ahead of the other two maxis, City Index Leopard and Skandia, the 2003 line honours winner.
The gaggle of boats behind the maxis included American yacht Rosebud and a quartet of local NSW representatives, Wot Yot, Yendys, Toyota Aurion V6 and Ragamuffin. The fleet started the 628 nautical mile race under east to north easterly breezes of five to 10 knots.
One boat, DHL-The Daily Telegraph, was forced to turn back after breaking the start. However, it made good progress and clawed its way back up the fleet following its early setback. City Index Leopard was the leading boat among the eight overseas entries six of which were from the United Kingdom, with one each from Mexico and the United States. As usual a large fleet of spectator craft was on hand for the start of the race.
Eighty-year-old Michael York, the Cruising Yacht Club of Australia's longest serving member, fired the starting cannon for the race.
Reproduced courtesy the Sydney Morning Herald.
Photo credit Craig Golding
You can read more about a yacht race in 'Port of Refuge' Vava'u, Tonga in the ebook 'Voyage of the Little Ship 'TereMoana' on my website http://www.sailboat2adventure.com/
Posted by sailboat2adventure at 17:10