Extract from the ebook 'Voyage of the little Ship 'Tere Moana' 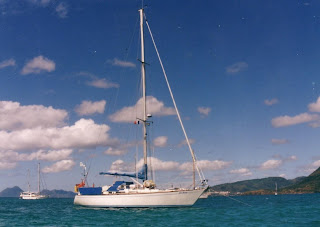 Our little ship reminds them that if they are to make Point Venus today, then they need to set
off now. Extricating the anchor from the mud, the hose and scrubber come into use, removing with some vigorous pokes and vigorous strokes, the thick grey goo from the flukes. Snubbed home with the anchor washed down, she turns into the gentle breeze and sails out of harbour on a reciprocal course from her entry just a few days before. A short sail eastward along the breakwater brings her into Matavai Bay proper where she drops anchor in about eight metres of water, into black sand. These are the same black sands that the anchors of Cooks’ ‘Endeavour’
would have embedded themselves in in 1769.

Following in the anchor prints of our most famous explorer did not go unnoticed by her crew. They chatter on about what it must have been like back then and if there may be any charming south sea maidens, bedecked with leis to welcome them as they step ashore. Whether it is because they have not arrived in a three master and given the traditional full navy salute, or they are not dressed in their grand uniforms, their arrival on the strand is marked only by the attention of a small band of screeching gulls, whirling over their heads. Other than this mild irritation, the beach is pretty much empty, a black curving band stretching away equally either side of them. For maximum effect they have landed dead centre, so are a little surprised at the absence of gleaming brown bodies dashing down the beach, ecstatic at their arrival! Several disdainful hurrumphs and grunts are exchanged as they labour the dinghy up the sandy incline, but these dissipate rapidly on the realisation that directly in front of them, edging the shoreline, is a small seaside café serving cool drinks and beer.

‘Huh, Cook didn’t have one of these waiting for him when he landed!’ offers Anglo crew - dignity is preserved.

Swinging gently on her chain, our little ship chuckles affectionately at the false vanities of these folks called humans.

Lazy late afternoon sun slips clammily down their backs as they head further eastward toward the point where they expect to see the treasures of the Transit observation. A couple of cold beers washing around in their system seems to infect the male crew members’ legs with a jelly like effect, reducing their ability to place one foot steadily in front of the other without meandering. Sibling crew, striding ahead, sniffs that they would have been better sticking to carbonated water as she had done! The cackling response from behind only serves to increase sibling crews’ tempo, leaving them even further adrift. The small clump of battered and paint flaked stores huddled at the juncture in the road pass slowly by to the right as they make their way out to the end of the promontory – windswept and barren. A few straggly bushes, struggling in their attempt to retain a foothold, dot the bleached white coral. Surprisingly, the rather impressive Point Venus lighthouse constructed in eighteen sixty eight at the knolly point is surrounded by a bunch of palms and casuarinas. It is here that our fearless crew become conscious, belatedly, that they must have passed the ‘Museum of Discovery’ on the way in. Looking around, that apart from the lighthouse, there are no other buildings in the area looking anything like a museum. For such a monumental event our crew were expecting, if not an edifice likened to the Palace de Versaille, some respectable construction recognising the stature of what took place on this spot two hundred and fifty years earlier. On enquiring from a local it is established that the museum was a very little more than a humble stone hut. It was demolished recently with the contents removed to Paris, where they are now on display, location unknown.


They now understood how the characters in the Da Vinci Code felt when coming up against a blank wall when unravelling a mystery. However, in the case of our crew they neither had the resources nor the inclination to board the next flight to Paris to continue their search. Admiring the stone and intricate brick work of the lighthouse once again, our crew turn away, ambling into the advancing dusk.

Extract from the ebook ‘Voyage of the Little Ship ‘Tere Moana’. You can read this on my website www.sailboat2adventure.com