Following on from my last post about possible GPS problems for the cruising sailor, here is an interesting post from Google Earth blog with some tips that cruising sailors may find most useful.

I particularly like the idea of storing earth views of remote ports of calls, anchoring/mooring areas, navigation hazards, underwater obstructions etc. on your computer, which can then be viewed on approach even if there is no or poor internet connection in that area. Always to be used in conjunction with the correct marine navigation charts, this facility can be a useful adjunct to your knowledge of a new anchorage.

Here's what Frank Taylor of the Google Earth blog writes about some of the interesting techniques he uses:
'A big part of the experience of sailing around the world is meeting up with other sailors doing similar routes. In French Polynesia, we have had numerous opportunities to meet up with the crews of boats we have met along the way, and many new boats as well. As a big fan of Google Earth, I have been making sure to share tips on some of the ways I am making use of Google Earth as we sail. Many of these tips apply equally to many other forms of travel. One thing is apparent, few people realize some of the less-known, but best features of Google Earth for travel.

Here are some important tips on Google Earth's lesser-known features that every sailor (and many other travelers) should know:

1) Google Earth can be used without an Internet connection - As we are traveling, I actually use Google Earth more without an Internet connection than with. Many people aren't aware that Google caches the last 2 GBytes (if your cache is set to the maximum) of imagery/layers you last loaded. What I do is visit the places I'm about to travel to (in particular the anchorages) and make sure to load the imagery of those places most important to me. It's important not to load too large an area or the cache will start forgetting the older stuff. Once we are on a passage (with no easy way to be on the Internet) we can still load Google Earth and view those last places loaded. I can view what the appraoch to an anchorage is like, and the places we plan to visit while reading other guide materials or charts we have. Read more about using Google Earth off the Internet. 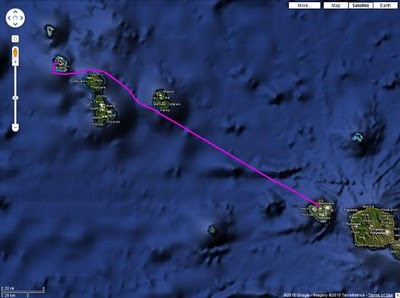 easure distances between places we are going, or the places we have already traveled. You can change the units (I frequently use the "nautical miles" units) to help convert to local measures. Also, you can trace out paths, not just single measurements (look for the tabs at the top of the window that pops up to find the "Paths" tab). This is very handy for measuring routes. As a sailor, I often use this feature to check distances on passages, determine the best places to anchor, estimate dinghy runs, and distances we'll have to walk to grocery stores and customs offices.

3) GPS Tracks - if you have a GPS, you can take your saved GPS tracks and use many free programs to convert your track to GPX. Some GPS programs will even output your GPS tracks directly to Google Earth's KML. But, Google Earth will read GPX files as well. Simply open your KML or GPX file of your track. The new Google Earth 5.2 presents you with a new option to save your file as a "track". This lets you play back the track with some new features like the time slider. I also recommend a free online program called "GPSVisualizer" to generate highly customized GPS tracks for use with Google Earth.

4) GPS in Real-time - Google Earth can connect directly to many GPS's. Look for the option under "Tools->GPS". If you have a Garmin with a USB connection, it is very simple. You can also use the NMEA option to connect. Read more about that in the Google Earth user guide. Once you have your GPS connected, Google Earth can show your position in real-time. It makes Google Earth into something like a 3D "chart plotter". Google Earth is not to be used for navigation purposes. The data is not intended for that, so it is not guaranteed to be accurate enough to sail by. However, using it as an additional reference has proven to be very effective. The satellite is often (but, not always) good enough to see underwater obstructions (such as coral heads, rocks, and even sunken ships). It has also been handy for seeing the best route through passes. In fact, I have often found GE imagery is more accurately placed than my electronic charts. You need to remember some of the imagery can be several years old though. The imagery is definitely not real-time (read about Google Earth imagery).

5) Many other uses - I also share our position reports, GPS tracks, and photography using Google Earth. You can share your photos for free with Google's Panoramio - which lets you map the positions of each photo when you upload them (or you can do the geotagging with another program). The photos will later appear on Google Earth and Google Maps for everyone to see as icons when the Panoramio/Photos layer is turned on. I also take 360 Panoramas and upload them to 360cities.net, which are also viewable on Google Earth, or you can put them on your web site (see example). Most importantly, I often use Google Earth while on the Internet to do research on the places we are going to find information and pictures about popular places to visit. Turning on the Panoramio layer is a fast way to find popular places (more photos in the most interesting spots). I also showed a bunch of sailors how to use Google Earth to show the best place to watch the solar eclipse that occurred over the central Pacific waters on July 11th.

These are just a few of the many ways I use Google Earth while sailing/traveling. They are all free, and easily available to anyone. All you have to know is that they exist, and how to use them.'

You can read more about GPS plotting and daily use whilst on passage in my ebook 'Voyage of the Little Ship Tere Moana' downloadable from my website http://www.sailboat2adventure.com
Posted by sailboat2adventure at 13:54

Hi, if you need a free converter program to get gpx file from kml format, I recommend to have a look at http://gpx2kml.com/ and see how it functions. It comes with a simple interface, easy to use.