Announcing their new 'Dock & Go' system for sailboats, Beneteau will probably go down as changing the face of sailing as Volvo did for powerboating with their IPS system a year or two back.

Initially the 'Dock & Go' will be available in the new Beneteau 50 'Sense' yacht, but shortly after in most of their sailboat range with engines with a rating of 75hp+. No mention as yet if it will be available on the open market. I sense the race will be on now for other manufacturers to come out with a similar system. 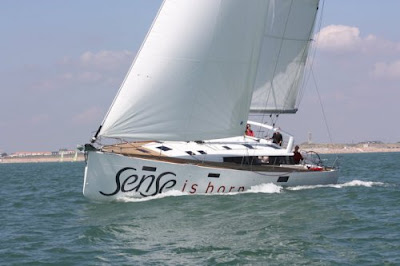 Here is a short article from the current Sail Magazine:
'Pretty soon our friends in the powerboating and superyacht community won’t be the only ones with access to joystick boat control.

In a recent press release, Beneteau announced that it has created what it calls its “Dock & Go” system, which employs a joystick to coordinate a pivoting propeller and bowthruster to facilitate easier docking.

According to Beneteau, the “revolutionary” system makes maneuvering even the company’s largest boats so simple that “a child could do it.”

According to Beneteau, “The system makes docking the boat in a restricted space easy and gives a precision of movement that is incomparable.”

The Dock & Go will be available for Spring 2011 deliveries as an option on all Beneteau models equipped with Yanmar 75HP SD engines, including the 50ft Sense, the Oceanis 46 and the Oceanis 50.

Beneteau will officially unveil the new system aboard a 50-footer at the United States Sailboat show in Annapolis, Maryland, October 7-11.
Take a look at this amusing video - it is in French, but I am sure you will get the gist of it!

Here is another article extract, this time from TradeOnlyToday:

'Beneteau is offering docking system for sailboats - Posted on August 18, 2010 Share this: Following the lead of the powerboat industry, which has been offering low-speed maneuvering and docking systems for some time (pod drives and thrusters in various combinations), sailboat builder Beneteau has introduced Dock & Go, a "revolutionary innovation to dock your boat with complete confidence." 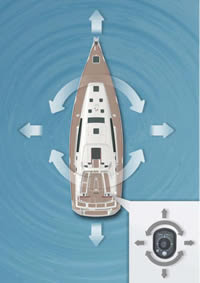 The system uses a joystick to synchronize a propeller-driven base unit with a bow thruster to maneuver a sailboat into a berth or mooring.

Here is how it works: A controller synchronizes a 180-degree pivoting Saildrive base and a bow thruster. Maneuvers are carried out using a cross-shaped joystick at the helm, moving the boat 90 degrees to port or starboard, forward, astern and turning on the spot. To go astern, the operator can pivot the Saildrive with no loss of power because rotation is achieved in half a second by an electric motor.

Beneteau calls Dock & Go "fun and very intuitive" and says the system will make "docking the boat in a restricted space easy" with "precision of movement that is incomparable."

The Beneteau system is similar to the ComfoDrive, a German system that was developed for sailboats two years ago.'
Extracts courtesy SailMagazine and TradeOnlyToday. Images courtesy Beneteau photo library.

You can read more about docking and amusing episodes on passage in my ebook 'Voyage of the Little Ship Tere Moana' downloadable from my website http://www.sailboat2adventure.com

I have purchased an Oceanis 41 which as a demo boat that already had Dock& Go installed. To anyone considering this option DON't DO IT, there are many problems and issues

1. There is a considerable delay when engaging forward or reverse when in conventional mode, in high winds & manouvering this is a critical failing and could easily result in injury (or worse)

2. Unit is subject to intermittently not working at all - engine starts perfectly, but will not engage any gear, nor will the throttle work, so you cannot even charga the battery

3. After sales support is totally non-existant,

Again, don't believe the marketing - the product does not meet expectations

,,, and also the same problems on my ´12 OC41. See
also the discussion on www.yachtforum.de developing
to a community of owners of a Beneteau with DOCK&GO hopefully growing up to a worldwide net-work ...