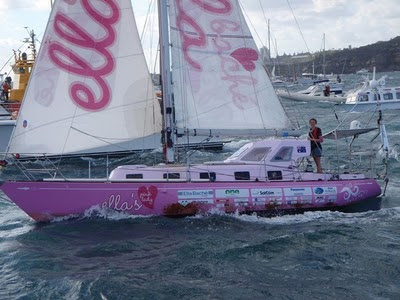 After 210 days at sea this gifted and determined sixteen year old completed her 'voyage of discovery' and arrived home to a tumultuous welcome of wellwishers both on the water and on land. Seeing Sydney Harbour and surrounds one would have been excused in thinking it was the start of the Sydney Hobart classic yacht race.
Jessica had been planning to complete a solo non-stop and unassisted circumnavigation of the globe since at least early 2008. Officially announced in May 2009, the journey was expected to take eight months with an approximate distance of 23,000 nautical miles. As the plan was to sail non-stop and unassisted, during the journey no other person would be allowed to give her anything and she must not moor to any port or other boat, although advice over radio communication was allowed.

Her boat is a 10.23-metre S&S 34, the same design as used by Jon Sanders, David Dicks and Jesse Martin in their circumnavigations. It was obtained and refitted with new equipment under the supervision of Don McIntyre and Bruce Arms, both skilled and experienced sailors. The refitting included a new galley, reconditioned diesel and water tanks, and a complete rebuild of the electrical system. Jessica Watson was also deeply involved in the preparation of the boat, which she 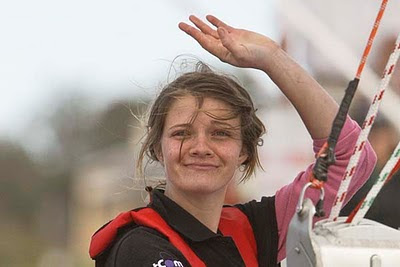 named Ella's Pink Lady. Most of the time the boat is steered by a self-steering windvane system. She has named the system Parker after the driver of the pink Rolls-Royce in the TV series Thunderbirds.

During her 'shake down' cruise, sailing from Brisbane to Sydney, on her first night out she collided with the Silver Yang, a 63,000-tonne bulk carrier at about 02.00 am on 9 September, 2009 near Point Lookout. Watson's sloop, the 10.4 metre Ella's Pink Lady, was dismasted in the collision. She was able to retain control and motor in to Southport. The full report is yet to be released on this incident.

Bringing the boat to Sydney for repairs and additional equipment (upgraded AIS system for one) put back her departure date to 18 October 2009.

The following seven months alone at sea tested her abilities and capabilities to the max and she has come through as a shining light and inspiration to all who have followed her, stepping ashore finally on Saturday at the Opera House, a different young woman from the one that left these shores in 2009. She stepped off her boat reluctantly, shed some emotional tears with her family, composed herself and then graciously went about her business of acknowledging the gathered crowds, accepting gifts and delivering a wonderfully humble, thankful and concise few words that would put most politicians to shame.

Cited as a hero by one and all including the Prime Minister of Australia Kevin Rudd, she immediately and quite firmly refuted this by saying that she was just an ordinary girl with a dream and the determination to follow it through. It is easy to see this just from the set of her face and her clear and steady gaze. Jessica will become a role model for youngsters everywhere.

Tuesday she achieves the tender age of seventeen and one wonders what she will do now. With most of her life in front of her Jessica can go forward and in her own words achieve anything that she puts her mind to - and I am sure she will. Happy birthday to Jessica and like the mighty Wandering Albatross when at sea, rarely lands on water, keep on flying!

You can read more about voyaging and passagemaking in my ebook 'Voyage of the Little Ship Tere Moana' downloadable from my website http://www.sailboat2adventure.com