The English language is littered with nautical expressions and words. Most of them originate from the wood and sail days of the British Navy, two and three hundred years ago. Expressions such as 'toe the line', 'tarred with the same brush', 'three sheets to the wind', and the most famous of all, 'splice the mainbrace', along with many many more are very much alive and well and part of everyday language today. This is a whole separate subject in itself and many sites can be found on the internet devoted to this phenomenon.

Two phrases which are more contemporary, roll wonderfully of the tongue and are relevent today as part of a cruising sailors store of knowledge are 'katabatic wind' and 'catenary pull'. Say these several times and you will see what I mean.

The following is a short extract from my ebook 'Voyage of the Little Ship 'Tere Moana':

'A thunderous thump, preceded by a low howling whistle abruptly wakes the crew from their slumbers. She realises it is the first of many wind gusts attacking her out of the long valley, but is surprised at the ferocity of it. She reels under the assault, heels over and carves quite an arc around her anchor point.

These night katabatic gusts are created by the cooler air higher up the mountain rolling down the valley, gathering speed and strength as it gushes downward, flowing over the lower slopes and out to sea, where it is finally spent. Anything in its path prior to that point receives a good hammering. Hence the noise on impact and subsequent discomfort. She is a little affronted and feels that it doesn’t need to be quite that violent.

The captain comes topside to check the anchor is still holding. Slipping back into his bunk he adjusts his hatch to control the airflow into the aft cabin. Subsequent gusts arrive intermittently throughout the night, but none seem to have the intensity of the first one. Maybe they become used to them? 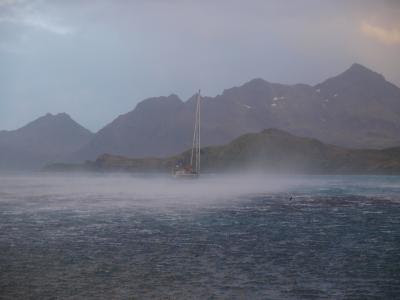 Morning comes up all dewy with a fine gauze like haze. Bathing in the early morning sun, the errant valley beams innocently back at them, looking blameless and gentle and quite incapable of handing out the buffeting they had received during the night.

Heading for shore to explore, our crew run the dinghy up onto the gently sloping beach..........'

Katabatic wind:
While the land breeze is rather gentle, not so the katabatic wind.
It doesn't believe in sweet dreams.

After a warm, windless and cloud-free summer day, the katabatic wind will blow in strong gusts. The cooler air from above will flow down the deep valleys and rush out to sea.

This local wind, which tends to spoil the most pleasant nights, can easily reach 25 or even 30 knots. It blows from late evening until sunrise. Kata means "downward".

More from 'Voyage of the Little Ship 'Tere Moana':

'Quietly cruising along the shoreline, this time using the inside channel, her intention is to anchor for the night off the famous Hotel Taharaa, nestled in a small bay midway back to Papeete Port.
Slipping around the headland in the now darkness, the bay opens up revealing a stream of lights tumbling down the cliff face. This is the hotel and it is
interestingly built using the slope of the land. 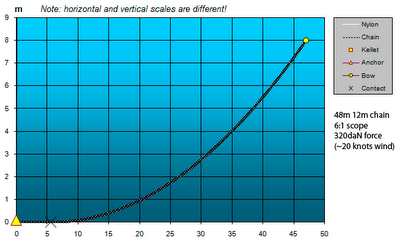 Fifteen fathoms of chain rode rattling into the black water announces her arrival. Reversing hard into the draw of the anchor digging in, she pulls up short and knows the anchor is set. Motor off, she lets the catenary pull of the rode drift her forward again, with the chain making a satisfying bubbling hiss as it sinks back into the inky water. She rocks gently back and forth, eventually coming to rest, her bow rounding into what little breeze remains from the day.

Dinner that night is served in the cockpit.........'
Catenary curve/pull: 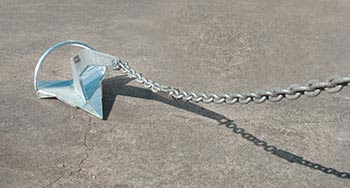 Catenary is a word which describes the mathematical nature of a certain curve, comparable with other terms such as parabola and hyperbola. While the path of a football kicked into the air is a parabola, a catenary is seen in the real world when a flexible line hangs between two points. It is the effect of gravity, a uniformly directional force, acting along its length. A typical example is the chain and rope connecting your anchor to your boat.

This catenary has the convenient effect of lowering the effective angle of pull on the anchor, which is the positive result we are striving for. Clearly, the heavier the rode, the better this effect, and the greater the pull will need to be to negate it (i.e. to pull the rode straight). Hence, the lore is to use heavy chain behind the anchor.
Extract and images courtesy Rocna Knowledge Base
You can read more about these and other weather phenomena in my ebook 'Voyage of the Little Ship 'Tere Moana' downloadable from my website http://www.sailboat2adventure.com
Posted by sailboat2adventure at 14:40

Very interesting post. I never thought that "toe the line" actually came from seafarers. Sadly, the use of these idioms are becoming less and less common but I guess change will always come.