To all sailors everywhere and especially in his home country of New Zealand Sir Peter Blake is fondly remembered with pride and affection. His life, exploits, successes and his huge popularity will always be commemorated. His later environmental works are still going on long after his untimely passing on that fateful day in 2001. 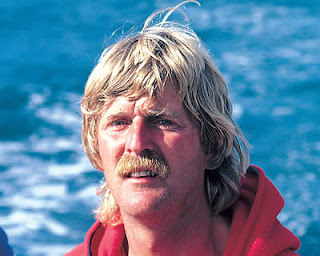 The construction of the new wing of The New Zealand National Maritime Museum which will be a wonderful tribute to Sir Peter and known as 'Blue Water Black Magic', is well under way and expected to be completed by the end of July this year.

It will be a fitting way to remember New Zealands most famous and one of the worlds most famous sailors, hero and general good guy.
Located in the heart of the New Zealand 'super yacht' finishing area at the Viaduct Harbour on the Auckland waterfront, it will be open to all. An inspiration to any visitor it will become a major tourist attraction for domestic and international travellers.

The following is an extract from the NZ National Maritime Museum website www.maritimemuseum.co.nz 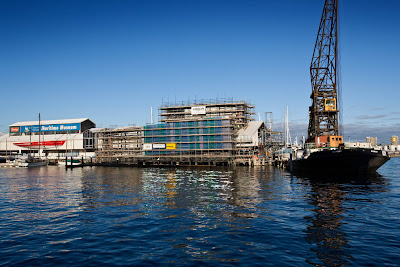 'The New Zealand National Maritime Museum, with the support of the Blake family and the Museum of New Zealand Te Papa Tongarewa and with significant investment from the New Zealand Government and Auckland City Council, is creating an enduring tribute to a New Zealand hero.
Blue Water Black Magic - A Tribute to Sir Peter Blake will be an engaging, inspiring, educational, fun, family-targeted interactive exhibition in a redeveloped Maritime Museum wing designed by renowned New Zealand architect, Pete Bossley www.bossleyarchitects.co.nz . The Maritime Museum’s Hall of Yachting is being completely redesigned and redeveloped to create an exhibition that will be rich in objects, stories, interactivity, audio visual content and colour.

Featuring the 1995 America’s Cup-winning boat NZL32 – Black Magic, the exhibition commemorates the life and work of Sir Peter, including the America’s Cup challenge and defences, the Jules Verne Trophy, the Whitbread Round-the-World races and other career highlights and personal stories, while also profiling many other key players, innovative designers and thinkers in New Zealand’s boating industry. 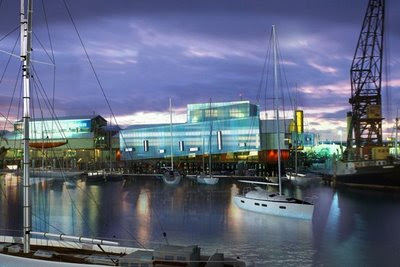 Central to the design of the experience is the commitment to engaging young people and families to try out and explore the elements of leadership and determination. To understand that even if “winning is everything”, failure is just as much a part of success - as Sir Peter himself said many times, “if it’s not hard it’s not worth doing”.

Extract courtesy New Zealand National Maritime Museum, images courtesy Pete Bossley Architects.
NZL32 'Black Magic' that won the Americas Cup will be suspended from the roof in August, the following three months will see the full fitout and a 'soft' opening in November with the Official opening taking place in January 2010, which will of course be attended by Sir Peters' wife Lady Pippa and family.
Posted by sailboat2adventure at 17:20