As with all technology, advances are continually made and it is no different with the 406MHz EPIRB technology. The latest generation come with automatic integration into your GPS system. 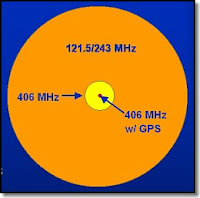 This gives much greater accuracy and pinpoints a vessel or MOB to 120 metres. The old 121.5(discontinued) was 12 miles approximately and the the earlier 406MHz units were 1.2 - 2 miles accuracy.

This Obviously gives the search and rescue teams a great advantage with much improved possibility of locating the target faster.

This is illustrated in the following transcript of the recent sinking of a French fishing vessel and subsequent speedy rescue of the crew:

The sinking of the 'Sandokan' - the fishing boat 'Sandokan' was wrecked on the 8th of April 2009 in Saint Quay Portrieux, North West France.

“While fishing operation, the boat scraped a rock with the keel, a leak appeared extremely rapidly and the trawler sank very quickly” declared William Abbestre, President of the SNSM from Saint Quay Portrieux.It is 2.15 PM when the two mariners of the 53 feet trawler see their boat sinking, from their life raft.

The distress beacon KANNAD 406 Auto, per 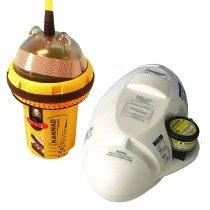 fectly adapted to the fishing boats, activates itself automatically during the sinking. The Search and Rescue (SAR) chain starts and the SNSM(French Sea Rescue), alerted via the CROSS(French search rescue co-ordination centre) , goes to the sinking place.

Meanwhile, the two mariners are picked up by sailors who heard the alert given by the CROSS(having received the signal from SARSAT).The two mariners, safe and sound, will be brought back to the harbor by the SNSM".

The Kannad 406 auto was the unit used in this incident and is illustrated to the right. Of course, it is vital for the crew to take the beacon with them as they transfer from the sinking vessel to their liferaft!

The COSPAS-SARSAT system plays an invaluable part in these rescues so I have put together the following summary for you:

The basic Cospas-Sarsat concept is illustrated in the adjacent figure. The System comprises:

Distress radiobeacons (ELTs for aviation use, EPIRBs for maritime use, and PLBs for personal use) which transmit signals during distress situations;

Instruments on board satellites in geostationary and low-altitude Earth orbits which detect the signals transmitted by distress radiobeacons.

Mission Control Centers (MCCs) which receive alerts produced by LUTs and forward them to Rescue Coordination Centers (RCCs), Search and Rescue Points Of Contacts (SPOCs) or other MCCs.

For example the GEOSAR system can pr

ovide almost immediate alerting in the footprint of the GEOSAR satellite, whereas the LEOSAR system
provides coverage of the polar regions (which are beyond the coverage of geostationary satellites).

They can calculate the location of distress events using Doppler processing techniques and are
less susceptible to obstructions which may block a beacon signal in a given direction because the satellite is continuously moving with respect to the beacon.

Go to the COSPAS-SARSAT website at http://www.cospas-sarsat.org/ for much more detail including a full list of approved 406MHz distress beacon manufacturers.


You can read more about safety at sea and personal MOB rescue beacons in my ebook 'Voyage of the Little Ship 'Tere Moana' downloadable from my website http://www.sailboat2adventure.com
Posted by sailboat2adventure at 14:01