It's not often that we move outside the realms of sailing on this blog, but coming across this object of blatant excess I felt it only my duty to draw it to your attention.

Wally, who until now have built a very fine and radical range of upmarket sailboats have ventured into an arena which one wonders where it is all going to end up. The latest offering from their stable is a monster of a powerboat called the Wallypower118. This is the Uber powerboat of all time and don't be surprised to see one in the next James Bond film! In fact it has already appeared in the movie 'The Island' with Scarlett Johansson.
In my earlier days of boating back in Christchurch, New Zealand, I purchased a used Hamilton Jet32 river jetboat. Hamilton jetboats were invented, designed and built by Bill Hamilton back in the early 1950's and are now famous worldwide. My little fourteen footer was designed to run up the shallow, fast running and braided rivers of Canterbury. It did 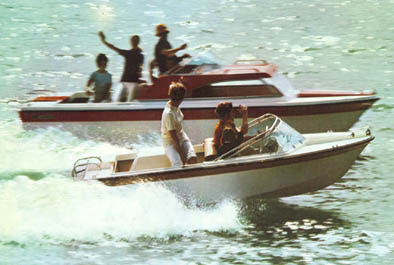 this job admirably and served me very well over a number of years chasing and catching salmon in the upper reaches of these fantastic rivers.
It was powered by a 3litre Ford V6 engine driving the jet unit and in flat water could reach the surprising speed of 48mph(clocked). It cost me close on three thousand dollars back then and provided years of adventure, excitement and fun. Maintenance was minimal and never more than could be carried out in the garage at home or on the banks of the river - unless you were unfortunate enough to come into contact with a large rock in the rapids and sink the boat! Fortunately for me, I managed to avoid that inconvenience.
Move on to 2009 and enter the Wallypower118. Also jet powered and generating almost 17,000lbs. of thrust it can propel itself through the water at a maximum speed of 60 knots, which converts to 69mph, which is a whole 21mph quicker than a Jet32 flat out - Wow!
With a few additional trimmings and a whole lot more hubris, you can pick up one of these mammoths for a cool 20 million or more - Wow again! With a 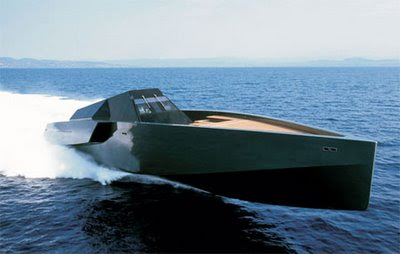 price differential of $19,997,000 with my old J32 this is exactly what I had in mind to upgrade to when I purchased her back then!
Having said that, the Wallypower118 is a startling piece of technology, would look phenomenal cutting through the water anywhere, but not what you would want to see bearing down on your cruising sailboat in the darkness of night, flying a Customs flag and a popgun on the foredeck - intimidating to say the least!
For a different point of view Google up 'Wallypower118' and read the review in http://www.yachtingmagazine.com/magazine.com/ by Dennis Caprio. Admittedly this was written prior to the arrival of the Global financial crisis, so things may have changed. He notes however, because of the controversial design and what it stands for, you would either love it or hate it. Looking at our current global situation and attendant environmental issues we are all facing, I think I would come down firmly on the side of the 'h' word - long live sail!
There is a powerpoint presentation and several short videos on 'Youtube' you can view.
Visit Wally's website on http://www.wally.com/ and whilst there check out their range of fine luxury sailing boats.
Wallypower118 image reproduced courtesy Wally
You can read more adventures on the high seas in my ebook 'Voyage of the Little Ship 'Tere Moana' downloadable from my website http://www.sailboat2adventure.com/