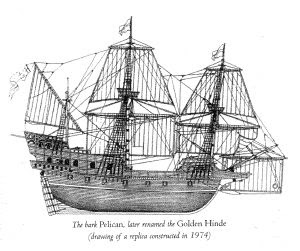 On November 14, 1577, Francis Drake departed London with 164 men and boys aboard five small ships. He was bound on a voyage around the world, but only Queen Elizabeth and a few highly-placed ministers knew that. The public announcement was that Drake was headed to Egypt to commence trading. This ploy was necessary to forestall war with Spain should King Phillip find out about Drake's real mission: To find the Strait of Anián, the western terminus of the fabled Northwest Passage. Drake had been a thorn in the side of the Spanish, and they viewed his departure with alarm. When Drake returned to England three years later with only one ship — the redoubtable Golden Hinde — he had plundered the Spanish colonies and completed a great circumnavigation. Drake broke the stranglehold the Spanish had in South America. More importantly, he opened trade with the Spice Islands. He both confounded and escaped the Spanish and the Portuguese. He arrived home safely, was knighted and became rich and famous. Not bad for someone who was basically a pirate! He never found the Strait of Anián. The method of navigation Drake and his contemporaries used was really nothing more than what we call dead reckoning. They had magnetic compasses, and course, speed and distance were still tried-and-true means of finding one's way. Some navigators used cross staffs to take a midday or noon sight. This was used to find latitude.

From noon observations of the sun, the height of the sun was entered into an early version of the Nautical Almanac where the declination was recorded. This precursor to the present day Nautical Almanac was called "Almanac and Prognostications.” Using these published tables, an observed altitude was established. Under the best of circumstances, a skillful navigator could determine latitude to within 15 nautical miles.
We will do a noon sight, using a sextant and using the 2006 Nautical Almanac. The height of eye on Golden Hinde is 20 feet. Drake is in the Atlantic Ocean bound for the Strait of Magellan. The day is December 20, and he is at a DR position of south 20° 50' by west 35° 15'. The Hs of the sun at noon is 87° 12.2'. We are shooting, for argument's sake, a lower limb of the sun. Also to make the sight easier to solve, let us assume that the time of the sight is at 14:18 GMT.

A: What is the Ho(observed altitude) of the sun?
B: What is the latitude?
Reproduced courtesy 'Ocean Navigator' magazine
You can read more about the early mariners' navigation methods in my ebook 'Voyage of the Little Ship 'Tere Moana' on my website http://www.sailboat2adventure.com/
Posted by sailboat2adventure at 13:38